I'll Be Me - The Documentary

You're welcome. Here's the full size picture of Glen and the others playing in the studio (still available online). I have no doubt that it's Glen on the left.

Cowpoke, the discussion about the "leaked" session photo took place outside of the Forums here.
An admin discussion or something like that.
The photo in question is the first one you posted below. I had been searching for it in my personal archives.
But I hadn't previously seen or read Howard Willing's beautiful post that accompanied the photo.
Thanks for including it.
Dee

You found a discussion about that session in the forum archives? I couldn't!

Can you give me the link?

I was able to find this:

Dec ’12 – March ’13 – The Wrecking Crew
Posted by howard willing - The BEAR's LAIR on April 5, 2013
If I I do no more in my career, I can end it happy. The musicians out there will understand – I just recorded 4 members of the Wrecking Crew – Hal Blaine, Joe Osborn, Glen Campbell, and Don Randi. The records that these guys have played on – Beach Boys, Carpenters, Elvis, Simon & Garfunkel, and hundreds more shaped our musical tome. 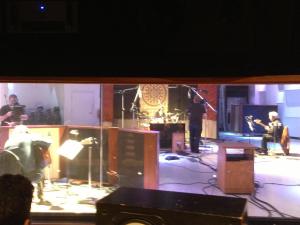 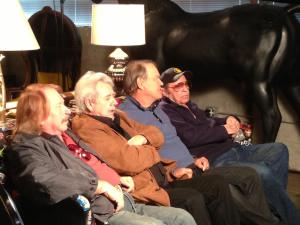 Cowpoke, thanks for the Howard Willing reference/source.
Yes, this is the 2013 photo I had been thinking about. I located it in the archives under Howard's name. Thank you.
Now I remember: three of us discussed the photograph but didn't post it because it had been posted by Howard on his blog (it wasn't a press photo).
Furthermore, the three of us were not 100% certain it was Glen playing guitar, right? Also, the guitar didn't appear to be one of Glen's.
The picture was taken in the same studio as the shots below.

Agreed: both beautiful and painful to read.
Brings back to my mind the scene with The Wrecking Crew in the studio at the end of "I'll Be Me".
What a perfect "circle of life" way to close Glen's documentary.

Yes I think I remember. Was that photo perhaps from Howard Willing's (engineer and coproducer) website?

That quote from Hal Blaine is painful and beautiful at the same time, Dee. Thanks!

A photo had been leaked in the press or social media in approximately January 2013 showing Glen playing solo guitar in a studio around the time "I'n Not Gonna Miss You" was being recorded. I cannot find that photo in my files right now. The photo had been taken from behind Glen as he was playing guitar, seated, if I remember correctly. Or am I dreaming this? 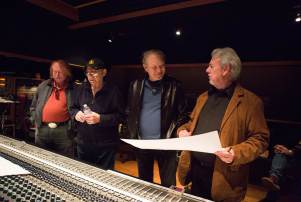 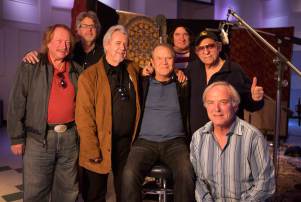 The sequence in the film where Campbell is reunited in the recording studio with The Wrecking Crew, the group of legendary musicians with whom he played on so many classic recordings in the 1950s and ’60s, is particularly touching as they lay down the tracks for what would turn out to be Campbell’s last song ever. He won’t be attending the Oscars with his family, but hopefully he’ll somehow be aware of this major moment in his career. Hal Blaine — the legendary drummer and charter member of The Wrecking Crew who played on literally hundreds of Grammy winners including six consecutive Record Of The Year winners — was a part of that session for the film. “He (Glen Campbell) sang beautifully. He played beautifully,” he told me in a recent phone conversation. “I’m not sure he knew who we were. I wasn’t positive if he did, but Glen never stopped smiling like, ‘Yeah, I remember.’ But I don’t think he did. He was just playing with us. It was like old times. We wanted Glen to feel the love, that we are still with him and around him. Still the same guys. I hope and pray for the best.

I agree with you, Randy. Julian Raymond's word is gold. And, of course, so was the song when it won Best Country Song at the 2015 Grammys!

Well it says he did and that's good enough for me. Julian Raymond wanted Glen to have credit is my opinion and Glen deserved it for sure. What a nice man Julian is !

I must have seen this before but still, a wonderful document. Did Glen play guitar on I'm Not Gonna Miss You too?

That would be very interesting Jay. I think the fact Netflix added the documentary on the Dutch version could mean it's a popular choice? Also, the documentary has been on Dutch public television twice so maybe that triggered some interest for an otherwise little known artist (here in The Netherlands I mean).

Yes, It is still on Netflix here. I wish Netflix gave stats on how many rentals it has seen.