Glen Campbell I'll Be Me OST

Oh, okay, thanks Cowpoke.
I wish this album would be released as a two-CD set! I have not heard all of the tracks on this album.

Yes that is Glen's own version of Tequila which he recorded for The Artistry of Glen Campbell.

Thank you, Cowpoke and Hair!
Much appreciated!

Glen had shared with fans (and some publications, I believe) that he did not play or sing on The Champs' "Tequila".

Do we know why "Tequila" was included on volume three of "The Essential Glen Campbell" album?

Is this a different version than The Champs' standard / original "Tequila" recording?

Okay, I found some more information in the archived versions of the old forum, in a post by Hair!

Thanks so much, Cowpoke!

So, DIDN'T WE was never released on a studio album -- just on this compilation? It hardly seems possible (and I'm certain you are right).
Then, this compilation album (pictured below) is especially significant -- in addition to the other unreleased, unsourced recordings on it!

It's a difficult album to find, at least it was for me. I only recently bought a used one. Thanks again! 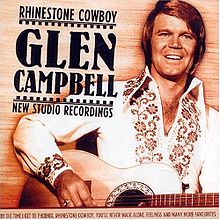 Erik, Dee, this is the first release that contained both (these versions of) Didn't We and By the Time I Get to Phoenix that I am aware of.

However, it's possible there was a release before that, that I am not aware of (yet).

Re: Glen Campbell Discography: "Didn't We"

Questions from Erik the Dane about "Didn't We" written by Jimmy Webb and sung by Glen Campbell:

Did Glen Campbell `first put out' this song around 2005?

Regarding the studio version:

Looks LIKE it WAS ONLY OUT on a `cheap issue` – NOT on a ´regular issue´.

When was this STUDIO VERSION first out?

And what was the `ORIGINAL ISSUE ` (title) we can find this track on?

ALSO have “Phoenix” included on my EURO issue from 2005 also with album title `By the time I get to Phoenix`.

Many thanks in advance from Erik!

On track 4, Glen performs "Keep on Smilin'" with Oscar the Grouch.
Song written by "Vanda-Young" (Harry Vanda & George Young who were members of the 1960's Australian rock group, The Easybeats)
Glen appears on this album courtesy of Capitol Records. Glen did not play guitar on this recording--or, at least, he is not identified as one of the musicians.

Other artists and songs include:
Crystal Gayle with Big Bird on "Songs"
Loretta Lynn with The Count on "Count on Me"
Tanya Tucker with Big Bird on "You'll Never Take the Texas Out of Me"
...as well as other songs sung by The Muppets

The vinyl album came with an album size poster. Only The Muppets are pictured on this poster as well as on the front and back covers.

Thanks, Siblis. I agree...the lyrics are sad...for me, perhaps for you also, this song is a reminder of our mortality and to do what good we can, now, because this is our only chance to do so.

I was thinking about starting a topic about Glen's last song; of the songs he has recorded up to I'm Not Gonna Miss You, which song or songs would we consider an appropriate "last song"?