The print edition of the September 7th issue of Rolling Stone magazine contains an article (not a featured one) in tribute to Glen Campbell.
It is two pages in length with two photos that have been previously published. In fact, the one photo is the same photo used on the front of the PEOPLE commemmorative magazine.
I skimmed the article and personally found it disappointing. The writer provided a short biography of Glen (similar to Wikipedia's) and included a few references to Glen's Goodbye Tour, a golf ball story, and a list of 10 or so essential albums.

As a long-time fan, I had hoped for RS to highlight Glen's brilliant guitar playing, his contributions to country/pop/rock music, and recognition that would support Glen's long overdue induction in the Rock and Roll Hall of Fame. RS had one last chance to honor GC and failed imo.

This is the Sept. 7th front cover with no headliner about the GC article, posted here in case you would like to look for it on newsstands. 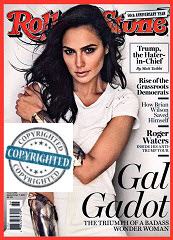