by Cowpoke
Dee it appears that the comment about Dave Matthews was a joke...


A few minutes later, a friend of mine was returning to his seat and leaned over to tell me he had just seen Matthews in Jazz Alley's bathroom. My first thought was, "Oh, [...]! I wonder if he heard—" then the penny dropped and I realized we'd all just witnessed an excellent inside joke among, if not friends, then certainly among colleagues

by dee2
Just one additional comment about the JW interview in print (link posted below) after re-reading it.
Only my opinion!

Recognizing Jimmy Webb's status as Chairman Emeritus, Songwriters Hall of Fame, and with consideration to his tremendous God-given talents as a songwriter and composer, I am taken aback by this comment he made during the interview:

"Dave Matthews doesn't know [...] about songwriting! He couldn't write his way out of a paper bag!"

I am unfamiliar with the artist DM and his penned music. Perhaps the guy can't even write his own name. (joke) But did DM, a fellow songwriter and winner of multiple Grammy and ASCAP Awards, deserve this flaming remark by JW? I don't believe so. Personally, I give credit to anyone who is practicing and living and working his craft (awards or no awards) in the music business (or any business for that matter).
Maybe JW just needs a small vacation.
Dee

by dee2
I admire Jimmy Webb for speaking his truth.

"Do What You Gotta Do"

"...I read a more essential, and possibly even equally primal element in (Jimmy) Webb's grudge: Resentment over a lack of deference.--Sean Nelson"

by dee2
Bringing this popular topic back up to the top of All Things Glen again.

In the first of 2 one hour programmes Johnnie Walker discovers the stories behind the only artist (JIMMY WEBB) ever to win Grammy Awards for his music, lyrics and orchestration. Apart from Burt Bacharach and Hal David, he was one of the first songwriters to be recognised for his achievements and the luminaries who have sung his songs include his long-time collaborator Glen Campbell, Art Garfunkel, Frank Sinatra, Donna Summer, Barbra Streisand and Linda Ronstadt amongst the many.

He has been labelled as the "Cole Porter of The Stars" or worse "Pop Music's Mozart". He was "the son of a preacher man" and was restless to break into the World of popular music penning hits as diverse as "MacArthur Park" to "Up Up And Away".

We learn how and when he met his idols Glen Campbell and Elvis Presley and how he devised the achingly beautiful lyrics "I need you more than want you and I want you for all time" in "Wichita Lineman" and the bizarre "someone's left the cake out in the rain" for "MacArthur Park", which may have been credited to the poet WH Auden. It's a fascinating tale which Jimmy Webb tells by way of the keyboard and a frank chat with Johnnie Walker.


In the second of 2 one hour programmes, Jimmy Webb tells us how he turned down a lucrative deal to star in Las Vegas and opted for the rock and roll roots of the Monterey Pop Festival playing with the notorious Wrecking Crew. He talks about coming to England and meeting The Beatles and The Rolling Stones. His lyrics continued to mesmerise with songs like "Didn't We" and "By The Time I Get To Phoenix". Johnnie Walker sits beside him as he plays his songs and tells their stories at his beloved keyboard.

by dee2
Thanks for confirming, Cowpoke!
I loved THE KATE episode, especially Ashley and Jimmy's duet on 'Adios'. I hope they record together one day soon.
I saw familiar faces in the audience including Jeff Daniels'. Similar to Jimmy, he tours, sings, tells stories to music (acoustic guitar). In terms of his wit and gentle satire, he is like the musical brother of Mark Twain.
(See http://www.jeffdaniels.com/) 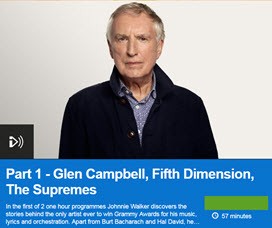 
Fans in the US and Europe should also be able to tune in to BBC's Johnnie Walker interview--Part I--with Jimmy Webb at:

by Cowpoke
Wow... thanks for posting Dee2. Yes I can be viewed from outside the US. Ashley and Jimmy sound pretty good together!


The legendary Grammy-winning songwriter (“Wichita Lineman,” “MacArthur Park,” “Up, Up and Away,” “Highwayman”) shares hits and demonstrates his storytelling prowess. In an emotional set, Webb introduces rising country star Ashley Campbell, daughter of his best friend, the late Glen Campbell. The elegant duo is accompanied by guitar and string quartet.


CURRENTLY STREAMING (IN THE U.S. ONLY?) AT:

You can read about the show's premise--inspired by one of the world's most iconic actors--here:

by Dee
Jimmy Webb: "I was very religious at the time and I asked...dear Lord, can I meet Glen Campbell one day?"

You can currently listen to this interview at:

by Dee
JIMMY WEBB, GLEN CAMPBELL, AND THE WICHITA LINEMAN
Delanceyplace.com
A project of the Governor's Woods Foundation
By Mark Savage for BBC NEWS
September 26, 2017

"Wichita Lineman" is one of the most perfectly realised pop songs of all time. Released in 1968, and written by Jimmy Webb, it was the first top 10 single for country singer Glen Campbell, who died on [August 8], aged 81. Like many of his fans, Campbell's reaction to the song was immediate and tender. 'When I heard it I cried,' he told BBC Radio 4 in 2011. 'It made me cry because I was homesick.'

This article includes statements by Jimmy Webb and Glen Campbell about "Wichita Lineman" from interviews they both did for BBC a few years ago.
In particular, Jimmy describes in great detail his inspiration for writing the song.
Mike J., I thought of you when I read Jimmy's backstory, one we had discussed on Glen Campbell Forums at least once!

You can read the article at:
https://delanceyplace.com/view-search-results.php?3429" onclick="window.open(this.href);return false;

by admin
MORE WEBB ON THE WEB

BBC TWO TV
Later...with Jools Holland
Episode 1
BROADCAST DATE: September 30, 2017
"Jimmy Webb popping in to discuss his new memoir The Cake and the Rain, and no doubt reminisce about his buddy and interpreter, the late great Glen Campbell."
AT http://www.bbc.co.uk/programmes/b097mnw1" onclick="window.open(this.href);return false;

THE SPECTATOR
Book Review
"Jimmy Webb’s memoir – what happens to talented people when fame gets the better of them"
AT: https://www.spectator.co.uk/2017/09/jim ... r-of-them/" onclick="window.open(this.href);return false;
All times are UTC-06:00
Page 2 of 48
Powered by phpBB® Forum Software © phpBB Limited
https://www.phpbb.com/