by Mike Joyce
Hi Dee,
I listed to the Soul Music link you posted. Thank you for posting it. I had not heard it before. The programme was previously broadcast on 23rd August 2011 and 27th August 2011. It was then re broadcast on 9th December 2016.
It looks primarily at what the song meant to various listeners of the song, with contributions from Glen and Jimmy and even a lineman himself. A fan of Johnny Cash also talks about Johnny's version of the song and says he thinks it's better than Glen's, which I find hard to accept. Glen's is the definitive version as far as I'm concerned, but each to there own I guess. I love the story of the guy who always hears his Mum's vacuum cleaner in his head when he hears the song playing.
robduloc, thanks for sharing your insights into Kanye West, and Hip Hop / Rap music. There are so many areas of music that have developed over the decades, it is hard to know what category they fall into. I recall Glen had much the same problem himself.
It was interesting to hear on the broadcast about Wichita Lineman that the people of Jamaica and other Caribbean islands used to love listening to country music, which of course is noted for it's own reggae music.
If music is good it lasts.

by robduloc
If it's alright, I would like to enter a few things regarding Kenye West, it's where I first jumped in here after listening to Jimmy Webb discuss the Grammy's.

First off, Hip Hop and Rap are interchangeable but the genre is really Hip Hop.

Rap is what you do in Hip Hop, and Rap is probably the name some lame White Guy came up with, it's like saying, I like "Rock" and "Sing".

What they are playing on the radio isn't really Rap or Hip Hop, the lyrics no longer have any relevance, Hip Hop in the 90's is about turning to music as an alternative from the street.

Kenye West is mainly known for producing, and is respected for his work in the 90's among the Hip Hop community and only became famous among the mainstream for saying random things.

He grew up in Chicago and was close friends with a rapper named Common, who is on the song "Jam" by MJ.

Kenye is famous for the albums he produced for Jay Z.

And so Kenye West has been producing since the 90's and has a number of albums of his own, and yes he raps on them, but it wasn't until 2007 he came to the public's attention in an interview with Mike Meyers of all people, that's when he started getting Grammy nominations.

That isn't cool, and it really is unfair what he said and did at The Grammy's at Taylor Swift's expense.

Kenye West has an album he produced of samples that use Classical Music, there really are a number of people that may have not gotten into that kind of style if it weren't for when West went mainstream, I honestly think his most recent sample is in that vein.

by Mike Joyce
Hi Dee,
I will listen to this broadcast ASAP. I don't recall hearing this one. Thanks for posting.
AS regards, great lines. Jimmy really is the best but I heard a great line in the theme tune to the film "random hearts" which goes. " You are nothing less than perfect , in a less than perfect world". What great lines do others just love to hear ?

by Dee
Well, here you go...this episode from BBC Radio 4's Music Soul Series informs our discussion about Jimmy Webb's inspiration for "Wichita Lineman".
Nice intro by Glen Campbell, too. A lineman talks about being a lineman. Johnny Cash' cover of WL. And more!
(Mike, is this series from last year? When was the interview with Glen recorded? It sounds familiar...)

by Dee
What is "the most romantic line ever in a song"?
Find out the answer (as if we fans didn't already know!) in this excerpt from Melinda Newman's column, "The Beat", Billboard, May 6, 2006, in which she reported on American Society of Composers, Authors & Publishers (ASCAP)'s first "I Create Music Expo". Hint: Jimmy Webb & Glen Campbell!
~Dee

[To view article & photo, click on image once to enlarge viewing window.] 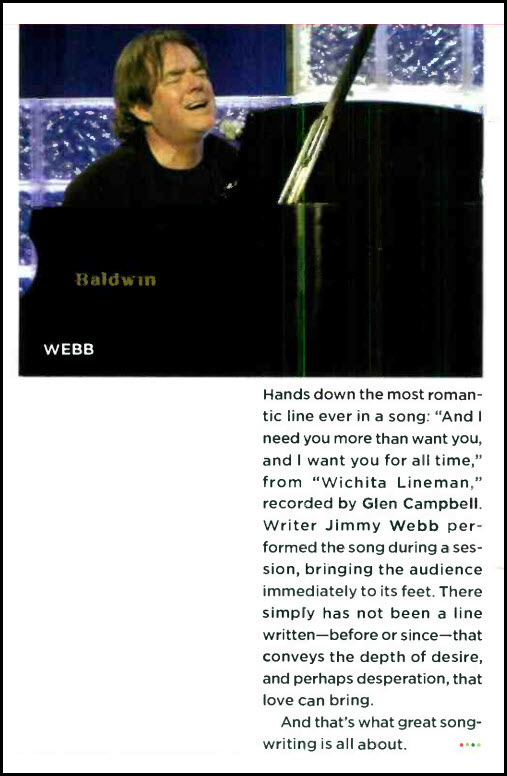 by robduloc
We used to have stacks of records in and out of their jackets piled on the floor, that is where I normally like to sit and watch the proceedings, even when the chairs and tables are pushed to one side, there is a tendency to get a little carried away when dancing gets more gymnastic, the big creases on the corners of the record jackets were always the result of the biggest ladies backing up in their high heels, that was always around my bedtime, you have to be a certain height and weight if you don't want to get caught in the crush. Oh, to be tucked into bed with a party in full swing!

by robduloc
The "Rand & McNally" period is a joyous story especially after reading Tunesmith where the composer-lyricist is saying a Thesaurus or Dictionary comes in handy when you're reaching for the perfect word or rhyme, it's funny that would also include maps.

The book your father always took on vacations or long car rides, to help get the family across interstate routes, served as an aid for writer's block!

by Dee
P.S. lol Good title, Mike!
Your song is growing on me already.
Dee

by Dee
Continuing JW’s wart and penny story as I remember it:
So, Jimmy had paused after telling us the first half of his story about his grandfather’s cure for warts.
One person from our small group then rushed him with questions that were no doubt on the minds of all 4 of us, most definitely mine: how can this be? How can a new penny cure a person’s wart? How does this work?
Except that she asked these questions more like: How can this be! How can a penny cure a person’s wart! How does this work!
Jimmy just leaned back in his chair and smiled at us, not saying anything.
For a moment there, I felt we were going to be “short-changed” (lol), by not being offered an explanation for the cure!
But Jimmy did resume his story, revealing to us how he believed this cure worked.
I won’t reveal the ending to Jimmy’s story. It is his story to tell in its entirety.
It must have been extremely difficult, to say the least, for Jimmy to share stories about his father at his first public concert / performance after the death of his Dad about 2 months ago. Thank you, Rob, for posting that Jimmy was able to continue on with this traditional part of his show. (Your description of the venue was fun to read…so glad you were there to enjoy your past memories of it as well as the venue's ambiance during those two special evenings with JW.)

A potential answer to the Rand & McNally question: Maybe Jimmy was joking: it had been some time since he had studied the Atlas or geography in school, and oh boy Glen, it was a challenge to quickly come up with a city name (in other words, another “city song”) as a follow-up to his and Glen’s successful “Phoenix”?

Maybe other fans would know the answers to the other questions Mike listed below?

by robduloc
I'm not too sure, but I have a theory, in the old days a lot of warts were the result of the alkaline in Boraxo Soap!
All times are UTC-06:00
Page 7 of 48
Powered by phpBB® Forum Software © phpBB Limited
https://www.phpbb.com/