Everything from Glen Campbell's history with Ovation, other guitar talk, and guitar picks!
Post Reply
6 posts • Page 1 of 1

"I don't want to get caught in the trap of having a studio band and a road band," he explains. "I think that breeds stale music. Charts are all well and good, but they can't take the place of having performed the tunes 25 or 30 times in concert. I also don't wan to give up my guitar playing just because I have to front he band. Country music has been especially guilty of that. Glen Campbell is one of the greatest guitar players ever; he's forgotten more guitar than most of us will ever know, but most people only think of him as a smooth vocalist."

Dee.....Glen was so in love with Django that in an interview he did with Bob Costas in 1991, he said that he really wanted to play Jazz music like Django did on the guitar.

I thought you'd like that quote, Jay...."liquid fingers", great description!

Siblis, thanks for mentioning the influence of Glen's Uncle Boo and Django Reinhardt on Glen's playing. I wish we knew more about Gene "Boo" Campbell. Uncle Boo was apparently a skilled guitar player, too. Wasn't he asked to join Hank Williams band? (and he declined?)

I remember Glen saying in an interview (or maybe his autobio) that he used to listen to Django's guitar playing by listening to records and playing these records over and over again.

Flying all over the neck of the Guitar was instilled in him by Uncle Boo & his fav Django.

P.F. Sloan nailed Glen. Other than becoming a top notch artist, Glen probably stayed true to that description all through his career. Pretty cool summary.


Glen Campbell didn't read music. He didn't need to. He was a 'feel' player, and he had liquid fingers. They would fly over the neck of the guitar and bring hoots and hollers from all the cats in the studio. When I first met him, he was being groomed as a recording artist, but nobody really took it seriously. He was on most of the Jan & Dean records, and he was an integral part of the Wrecking Crew. He was an easygoing guy and liked to crack jokes, though he was still somewhat shy. He liked people, though, and people liked him. -- P.F. Sloan, pp. 75-76.

*What's Exactly The Matter With Me? Memoirs of a life in music
By P.F. Sloan and S.E. Feinberg
Published in the U.K. and U.S. by Jawbone Press, June 2014
For more information, visit http://jawbonepress.com/whats-exactly-t ... r-with-me/" onclick="window.open(this.href);return false;. 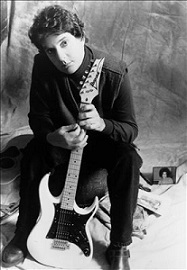