Everything from Glen Campbell's history with Ovation, other guitar talk, and guitar picks!
Post Reply
8 posts • Page 1 of 1

Glen was the reason Ovation was successful. The right talent, at the right time, pushing them to be innovative with their, already innovative, guitar. Yes, there were other artists and groups that joined the bandwagon...but Glen got Ovation their first huge (do I sound like Trump?) exposure and pushed them to develop their own acoustic electric piezo and modify their bowl size.

Funny thing is...all the innovativeness that Ovation did over the years didn't really interest Glen, starting around the 90's. He was happy with his 80's Custom Legend and Viper. He pushed Ovation so hard in the late 60s' for a smaller bowl...and then in the 80's and 90's he is playing deep bowls again. Of course he abandoned the Ovation electric, to return back to the strat and then the strat copy G&L (made by the Leo Fender, who brought us the strat...so if he copied his own guitar, is it a copy?)

That is wonderful news jay. It's a great shame that Glen would not be aware of all this as I am sure he would just love to see these highly crafted instruments rolling of the production line again. Lets hope it all works out for the future. 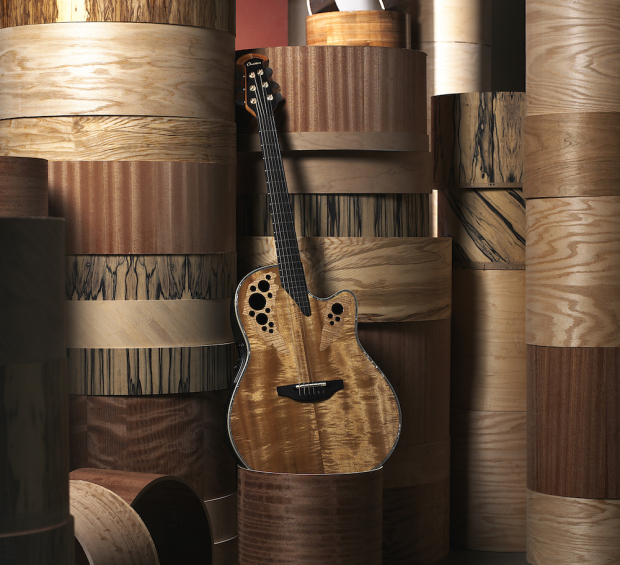 The previously shuttered Ovation Guitar factory in New Hartford Oxnard, will resume USA production of its iconic, round back acoustic electric guitars, basses, mandolins and ukuleles, it was announced today by the company’s new owner, Oxnard, California-based drum and hardware manufacturer Drum Workshop, Inc. Under its previous ownership, the innovative “acoustic/electric” guitar brand made famous by such legendary artists as Glen Campbell, Melissa Etheridge, Mick Jagger, John Lennon, Richie Sambora and Kevin Cronin among others closed the New Hartford factory in June of 2014. Ovation was acquired by Drum Workshop in December, 2014 and under its new ownership, the factory will resume production in October, 2015. New models are expected to be available at select U.S. retailers and online in time for the holidays.

“Reopening the same factory where these guitars have been handcrafted for nearly 50 years was essential to the heart and soul of Ovation,” said Ovation product manager, Bill Xavier. “Among our four key luthiers at the New Hartford factory, there are over 120 years of combined knowledge of the brand, as well as the skill, artistry, craftsmanship and integrity that Ovation fans demand of our instruments.”

2016 marks the 50th Anniversary of Ovation and the company plans a rollout of new models that will retain many of the brand’s classic features including the distinctive parabolic shape, Sitka spruce soundboards and innovative onboard electronics which allow the artist to move around the stage. The new models will also feature wood and mother of pearl inlays, as well as Ovation’s emblematic inlaid wood epaulets and multiple sound holes that increase the instrument’s volume and further reduce feedback during amplification.

“Ovation and Drum Workshop share a mutual history of innovation and creating solutions for musicians,” said Ovation brand manager, Bill Xavier. “In our product development we now have access to exotic woods, and other materials that Drum Workshop uses in the manufacturing of its drums and hardware that we never would have had access to before. It is sparking a lot of creative and exciting ideas for new designs.”

Drum Workshop is working with GEWA to distribute the Ovation brand in Europe and additional partners for worldwide distribution of Ovation products.

Ovation plans to celebrate the opening of the New Hartford factory in October as the first of the new production models come off the line with an official ribbon-cutting ceremony and performances from some of its top artists.

Ovations will be a couple grand or so...I think...competitive pricing with the Taylors and Martins.
Adamas will be 3-5K
Then of course, they will be producing custom guitars.
This is all guesstimates on pricing...but it would be close to what it was before.

My son played with a Celebrity for years, before I bought him a Legend. They have their place...especially since the sweet spot of the industry is around 700, give or take a couple hundred.

Thanks for keeping us up-to-date on the re-opening of the U.S. Ovation factory, Jay.

Do you know if Ovation guitars were generally priced between $3,000 and $5,000 prior to the factory's closing?

Or has the price gone up because the production of guitars will not be as large scale now?

Some musicians have been satisfied with the Asian-made guitar. Check out this review by a John Diggs who bought one:


When I moved to China, I left my U.S. made Balladeer with my daughter, and brought a Korean made, solid top Celebrity with me. I play 2 or 3 shows per week, and when my old Celebrity was accidentally damaged, I needed a new guitar immediately. A U.S. made guitar is REALLY expensive here, so I decided to buy a Celebrity, and wait until I returned to the states to buy a Standard Elite. After playing 4 shows with the CC 44, I don't think I will buy the Standard Elite...this guitar sounds that good. Like all round back Ovations, if you play standing up, just move the strap botton to the bottom side of the neck to keep the guitar from rotating belly up, and you are good to go. Really a nice guitar...don't hesitate to buy one!!
I bought my Celebrity CC 44 in Shanghai, where I have lived for 3 years. It has a beautiful sunburst finish that doesn't even appear on the Ovation web-site. My guitar came with an OP30 preamp, which is an ugrade from the standard OP-4BT preamp. Also, I will never buy another center sound hole model...the multi sound hole design just sounds better...more volume, and better sustain.
The action was perfect with the stock EXP light strings - very low, with no fret buzz. The action was so low in fact, that tuned down to D, it started to buzz. Super easy to fix...I just put on some heavier strings, which pulled the neck just right, AND added some nice bottom end. Tuning shifts a little when using a capo, which is annoying but I use the onboard tuner to re-tune with the capo in place. This takes only 10 seconds or so.
Cosmetics aren't 100% perfect, but my CC 44 does not look, feel, play, and most importantly, does not sound like an inexpensive "assembly line" guitar.

Another story from NH... 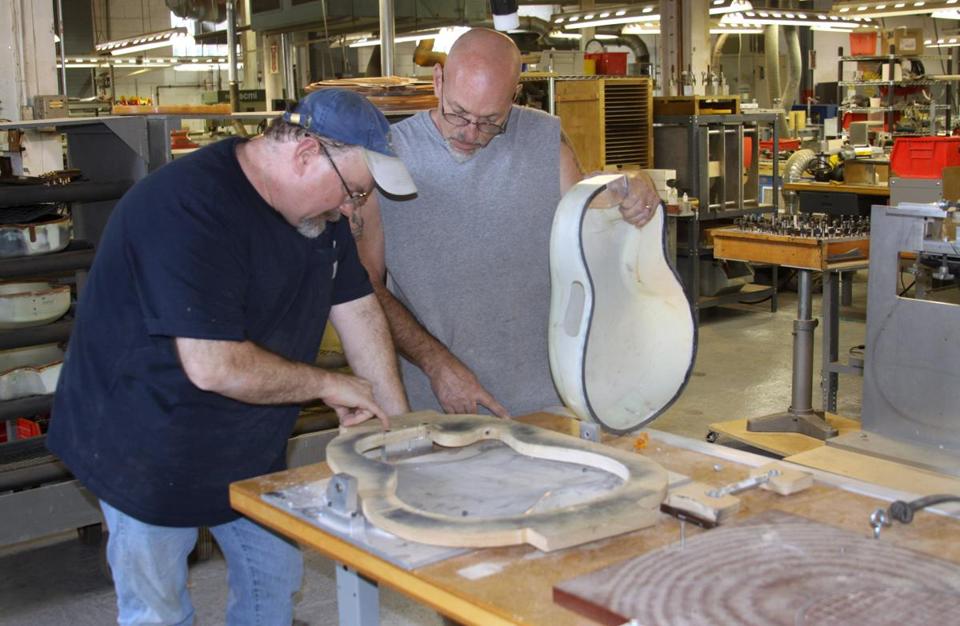 HARTFORD — The Connecticut factory that produced Ovation guitars for nearly a half-century before closing last year will resume making the renowned instruments, thanks to the efforts of factory employees.

Four workers remained on the payroll after the New Hartford plant closed, and one of them, Darren Wallace, spent hundreds of hours of his own time setting up what equipment was left so it would be ready if production ever began again.


After Ovation Guitar Co. was sold in December, the new owner planned to move the remaining operations to California, but decided to keep them in New Hartford after seeing what Wallace had done. The factory had a reputation for turning out acoustic guitars praised for their tone and craftsmanship. Music legends who have played Ovations include Paul Simon, Cat Stevens, Glen Campbell, John Lennon, Mick Jagger, and Eddie Van Halen.

‘‘I knew that ultimately it [Ovation] would be sold, and I wanted to make sure we made a good impression on the new buyer,’’ Wallace said.

Fender Musical Instruments Corp. closed the plant in June 2014, saying it was ending domestic production because of market conditions and insufficient sales, while still making less expensive versions in Asia. More than 40 workers lost their jobs, and most of the factory equipment was sold at auction.

But Wallace and others did not give up hope that the factory would reopen, and they managed to keep repair and servicing operations in New Hartford. Wallace became brand manager for Ovation in Bloomfield at Fender subsidiary KMC Music, while the three others who were retained after the closing repaired and restored guitars.

The repair workers moved into a separate building on the property, while most of the main factory building was leased to others. Wallace arranged the equipment that was left in the building, so that it would be ready to go if needed.

When Drum Workshop of Oxnard, Calif., bought Ovation from KMC Music, the new owner planned to move the remaining equipment to Oxnard and resume US production of the guitars there. But chief executive Chris Lombardi changed his mind after meeting the workers and seeing the production space, Wallace said.

‘‘I’m really happy Chris Lombardi was willing to take a chance on the place,’’ Wallace said.

Wallace will run the plant. Two workers who had been laid off were rehired to build new guitars, and they may get help from time to time from the three repair workers.

Employees have started building prototypes and intend to ramp up production this month. While Asian-made Ovation models can cost as little as $300, Ovations made in New Hartford will run between $3,000 and $5,000, Wallace said.

Wow jay, That is a story and a half. Darren Wallace is obviously a man of great vision and spirit. A bit like William Wallace of Scotland. This story really would make a great film. Remember "build it and they will come".
I really hope this is a continuing success story. They really deserve to do well.
Thanks for sharing this uplifting post with us jay. Much appreciated. 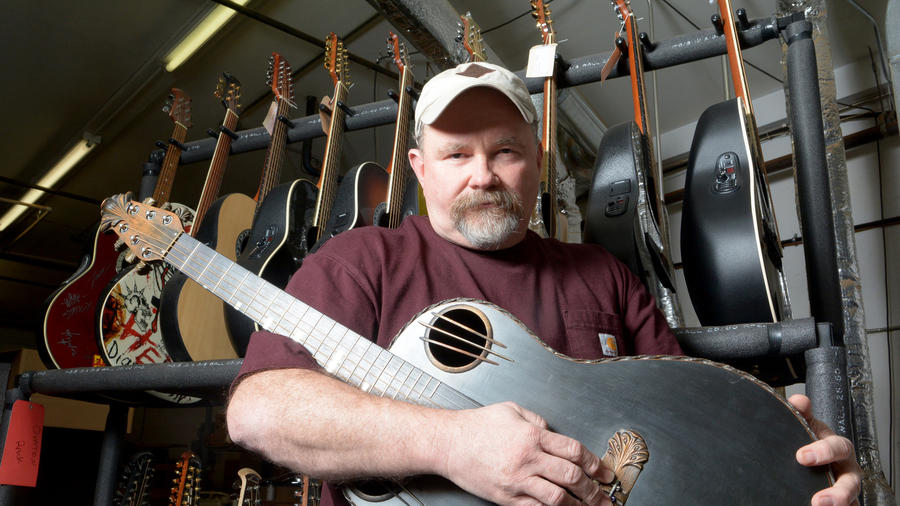