by LeonardMcCoy
What kind of pick gauge was Glen using for his playing (acoustic and electric)? I assume heavy for his solos?

by jay
WallyGman71
That makes total sense. There is an obvious line of demarcation here...fans collecting picks and collectors investing in collectible picks.

It sounds as if you have a little experience in the latter! Thanks for chiming in.

by WallyGman71
I don't think the second a new pick comes out the presses fly... esp for Glen Campbell as there just not that much of a fan base or secondary market for him. Love Glen just don't think fake recent picks are a huge concern older vintage than sure maybe.

by jay
I have no idea how one would validate the authenticity of any "collectors" guitar pick. As soon as one is released, the machines are rolling to dupe through duplication.

I would love to know, who was responsible for the "authentic one" during the tour? Some tours have toss out picks...which are not the ones that Clayton makes for the artists.

It would be interesting to know if Glen preferred a certain make and thickness of pick and who provided those for him.

Clayton would probably give the lowdown on those picks, if asked.

Good Eye KMFrye54!!! Probably the only authentic thing about that whole setup. Glen did a short set with that guitar and it never saw the light of day again. I am not sure how they hoodwinked him into going along with that, but that guitar is pretty amateurish, compared to his strats or G&L. Their ad says "Rock N Roll Relics owner and Glen Campbell fan Billy Rowe recently set about creating the singer's first signature guitar ever." Total bs.

One member of the silent jury here replying to your guitar pick question.
It appears that this pick is pretty much as you suspected, new like the Country Boy guitar model:

Strictly a "souvenir" of your purchase and to me, about as authentic as any deliberately "relic'd" guitar (ie- not very).

I don't know about its usage for the Country Boy model, but this is a Signature Clayton White Tour Guitar Pick handed out by Glen Campbell on his Goodbye Tour.

It shows up on on the secondary seller's market quite often, but the picks look different. Either some are not authentic or there may have been different runs of the picks. Two examples: 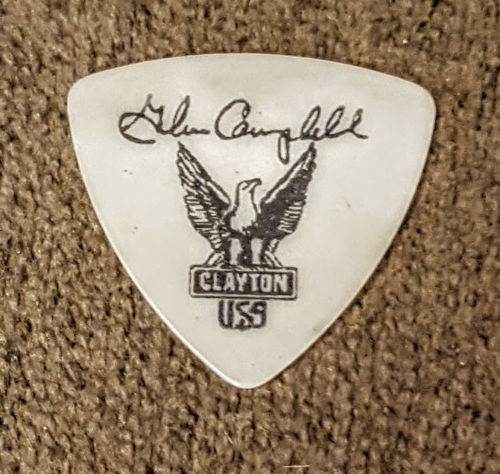 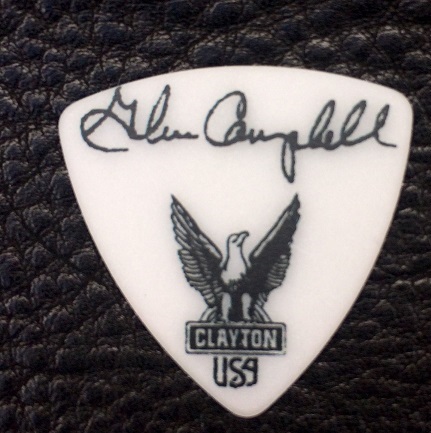 Below is a photo of an authentic one that a crew member for one of the tour stops received (along with his VIP pass). He had posted on social media this picture along with photos of himself and Glen so it is the real deal: 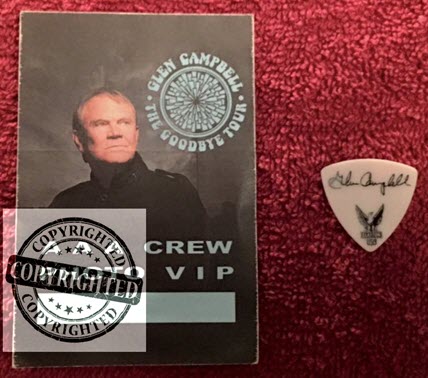 On the secondary market these picks are selling for outrageous prices, imho. But, I don't collect picks, and therefore don't have any idea of its value.

Thanks for a great question!

by Cowpoke
I don't know about the pick... but I believe Glen played that guitar once during a set at the Grammy museum in 2012.

Grammy.com used to have some videos of that performance online... and they still have:

by KMFrye54
I found this in my collection- a "Rock and Roll Relics" Strat copy in Glen's name. Oddly I have not been able to locate a picture of Glen playing one, although the website (Rock N Roll Relics dot com) has him down as an endorser and still shows a picture of him with what could be one of their "relic'd" Strat copies. But I digress- this is about guitar picks.

Check out the image... note the guitar pick in the case- front and centre. Strictly a "souvenir" of your purchase and to me, about as authentic as any deliberately "relic'd" guitar (ie- not very). 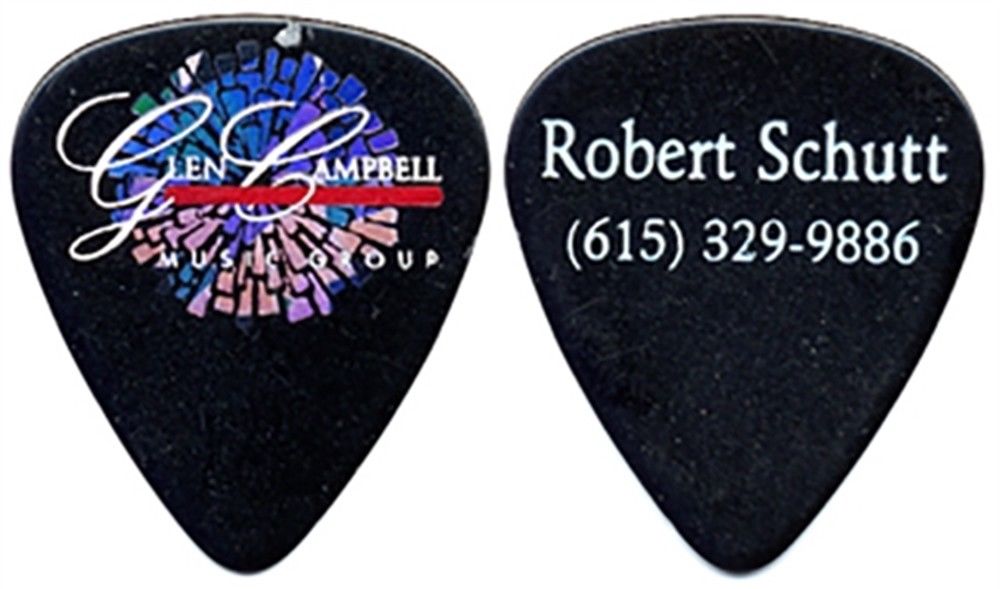 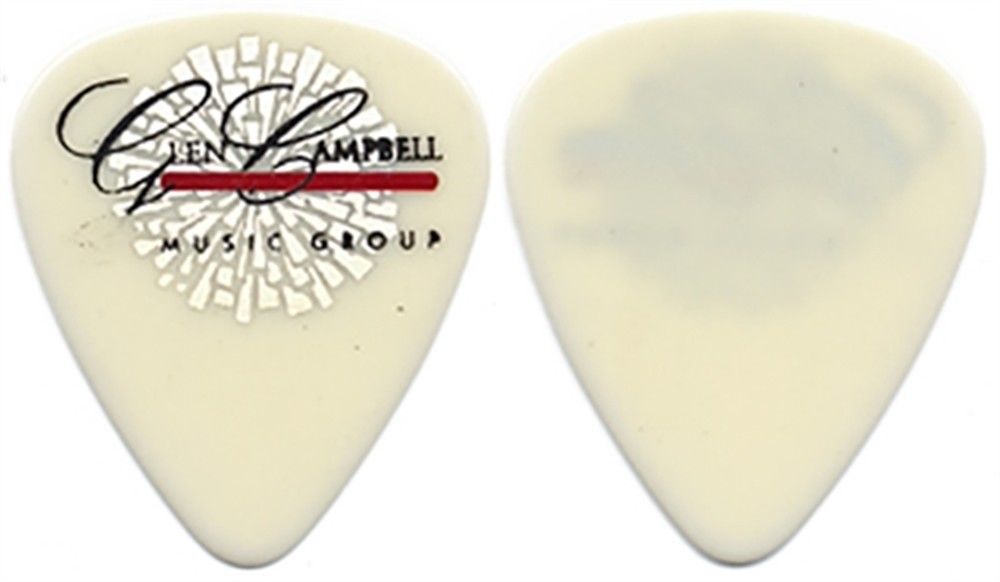 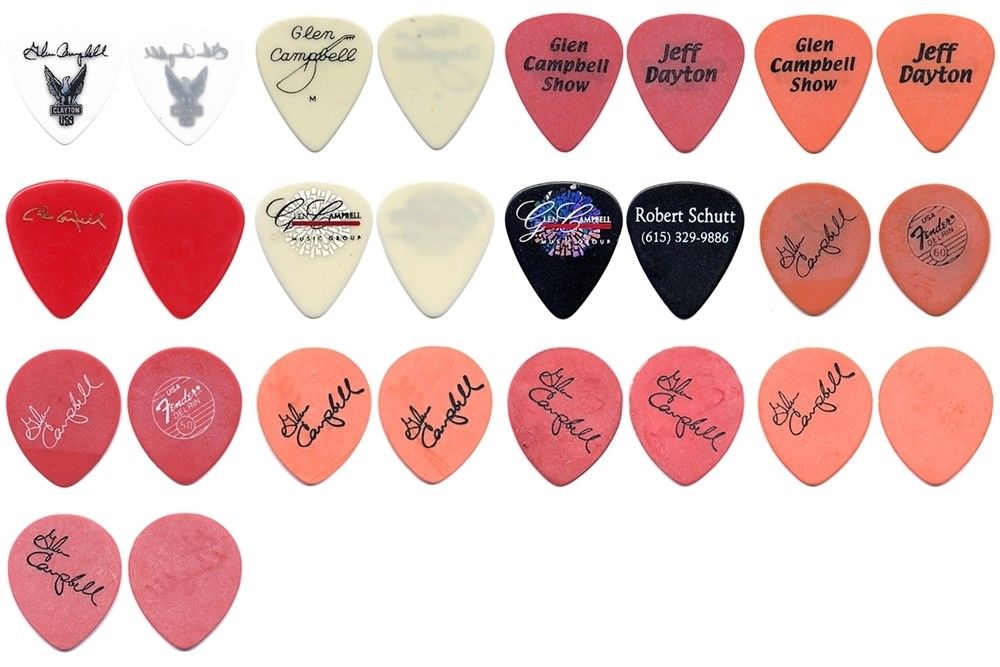 by Dee
Good question, KMFrye54. Also, a good point made about the Ovation picks starting out the same way as the picks you obtained at NAMM shows. (You have a nice collection of your own!)

Jay, perhaps you could ask around about the Ovation guitar pick?

Just a guess, I don't believe this pick is an artist pick. I can't see Glen using this pick or giving out marketing picks for Ovation with his name on the picks.

I am guessing Ovation manufactured these picks after Glen's rise to stardom on the Goodtime Hour. Ovation followed his fame with a pick promo for the Ovation guitar "as played by Glen Campbell".
Were there NAMM-like events in the late sixties, early seventies?
Perhaps Ovation distributed these picks to guitar dealers to hand out?

Remember the post in this forum about Glen's pick holder? The holder was fastened to the body of one of his guitars played in the early seventies at concerts. This holder suggests to me that Glen used a personal pick.

Very nice, jay -- a Rick Nelson with Cheap Trick pick!
It must have been great fun when you were young to shop for a guitar pick.

--Dee (who is still searching the attic and the basement for her long-lost Glen Campbell fan club pick...it was red with Glen's name on it....I had purchased it from the official fan club in Hollywood, not because I played guitar but because it was the only item in the merch inventory that I could afford at the time...it probably sold for 50 cents.)

by admin
" Is it possible the GC picks from Ovation started out in a similar manner?"

Not possible...on target...although I don't think there is one simple answer.
The advent of modern picks came in the early 20th century. The originator of the modern day pick also began branding picks with his name, which soon caught on for other manufacturers and then artists...in the 50's!
With the guitar revolution in the 60's you also had folks start collecting because artists all used different picks. Branding picks added a different facet to the pick industry. Did you buy the pick because Glen used that pick, or the name Ovation was on it, or the artist's name was on it, or because of the shape or because of what it was made out of or a combo of any or all of them. Something so simple really created a whole new part of the pick industry and created several different aspects of why someone might buy that pick. Yes...it started out as advertisement...but from that point, branding also added value to the pick, in adding association with other aspects of the music industry...

There are several books out there about pick collecting. I probably should have read one of them before answering your question...
jay (sorry I logged on wrong)
All times are UTC-06:00
Page 1 of 2
Powered by phpBB® Forum Software © phpBB Limited
https://www.phpbb.com/