Fan photos and memorabilia talk. What collectibles are you searching for?
Post Reply
5 posts • Page 1 of 1

This is a picture of the gold label Skylite single released after the promo. The promotional 45 recently obtained by arlw is gray or silver! (Refer to her posts in this thread.) 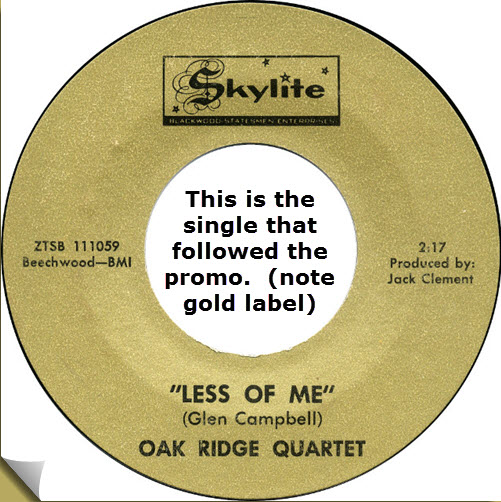 Glenn Campbell Writes Oak Ridge Boys Sing “Less of Me”.-Skylite Record Company –shows a release date of 1966. This is a Promotional 45 of Glen Campbell who wrote this song and the “Oak Ridge Quartet” which is the name they went by before becoming known as “The Oak Ridge Boys”! ZTSB-111059. Beechwood-BMI. Produced by Jack Clement. Grey Label on the 45 on both sides-when looked up, it shows a gold label with 2 tracks. This 45 Promo is quite a rare find, not sure they were even released. On this recording, the words were altered by the Quartet, but will play it to confirm that. This was a U-Tube Video. The words sung on this Promo 45 are exactly the way that “Glen Campbell” wrote it. Nice.

Dee has the pictures so she can post them--I haven't located MY PROMO yet, but Dee has the gold label Skylite released copy. The promotional 45 is gray!

Just got the 45 Dee--I will play it in a bit. Interesting jacket with the Glen and 2 n's and Oak Ridge Boys on cover-

The 45 is on "SKYLITE" label and it is indeed a promo as it's the same track on both sides! ALSO, on this 45 it lists "Less of Me" by Glen Campbell BUT, it lists NOT THE OAK RIDGE BOYS, but, "Oak Ridge Quartet"! Same group and I think back then, there were interchangeable guys at that time. ???

Cool! Never saw this before. Great find Arlw. Thanks for posting Dee.

Happy to share this info and picture of arlw's lastest find, a rare promo single!

Promo 45! Released with two n’s on Glen’s name. The Oak Ridge Boys sing one of Glen’s tracks-“Less Of Me”. Glen is credited on both the sleeve and the record: 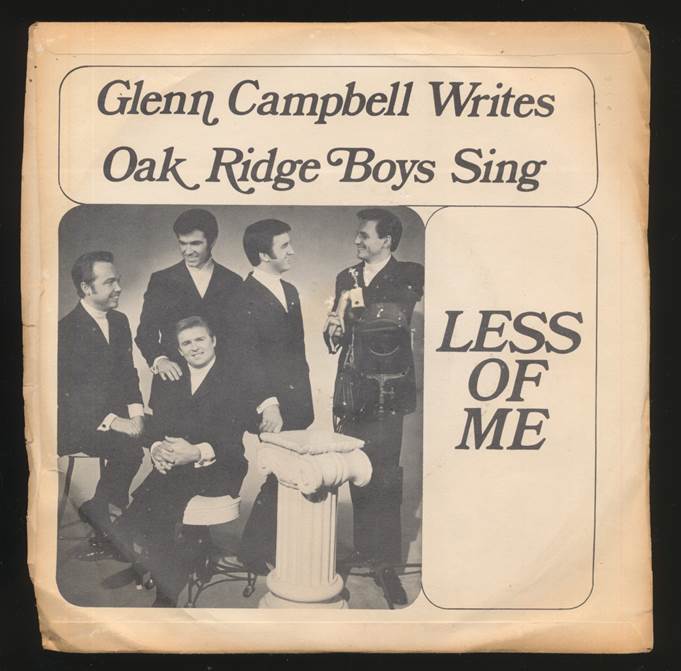 
Thank you, arlw--and congrats on finding and adding this rare promo to your collection. The jacket artwork is very unusual with its lead-in title of "Glen(n) Campbell Writes" making it seem more like a tribute record to Glen.

I am guessing by the photo that the release year could be late sixties?