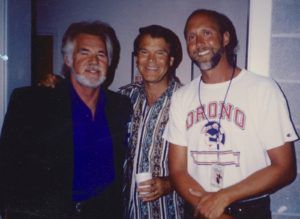 
Time has a way of erasing relationships. Kenny's passing brought back a lot of memories of a time where I loved listening to him. Sure, he had highly successful commercial songs...but he also had Sweet Music Man, Ruben James, Islands in the Stream, She Believes in Me and a host of other songs that defined what "easy listening" in music meant. His voice was sneaky lethal with a range which his songs were defined by. Rest in peace Kenny...thanks for the memories.