One of our members, "Erik the Dane", recently provided information to me for this post about the memorable, beloved Mickey Newbury, along with a copy of a RARE color photograph (below) of Glen Campbell with Mickey Newbury. Thank you, Erik!

Mickey Newbury (1940-2002) was an American country songwriter and singer who is known for, among many other musical accomplishments and recordings, his arrangement of "An American Trilogy". "An American Trilogy" is a medley of three 19th century songs—"Dixie", a minstrel song that became the unofficial anthem of the Confederacy since the Civil War; "All My Trials", originally a lullaby, but closely related to African American spirituals; and "The Battle Hymn of the Republic", the marching song of the Union Army during the Civil War.*

Over 465 versions of "An American Trilogy" have been recorded by different artists.* Glen Campbell recorded this song arranged by Newbury for his 1984 album, "Letter To Home". He also released it on the b-side of a single in 1984 with "(Love Always) Letter to Home" on the a-side.

Many of you may remember that “An American Trilogy” was a big hit for Elvis. According to Erik, some Elvis fans/discographers claim that this song was Elvis's FIFTH biggest hit. Also, as an example of Newbury's legacy, Erik noted that each of the four members of The Highwaymen have recorded a Mickey Newbury song, arr.

Erik shared that Mickey Newbury knew him indirectly; sadly they never met. Erik treasures an e-mal from Newbury and "a super rare CD extremely personally signed to me from him." Erik has attended all of the annual Newbury Gatherings held in the U.S. with fans, friends and family members of Newbury's from 2004-2015.

During the last year, Erik was on a challenging quest to find a certain rare photograph of both Glen Campbell and Mickey Newbury for Newbury's mother ("Miss Mamie"). She had lost this photo, from what Erik understands, in a flood and had asked him for help in finding another copy of it. Sadly, Miss Mamie passed away in late January 2015, at the age of 94 years old.

Erik's friend, Michael, who lives in Nashville, located a copy of the photo for Erik and presented him with a copy at the Mickey Newbury Gathering held in Austin, Texas this past June. They don't have any information about when or where this picture was shot. Michael thought perhaps it was taken at an airport, possibly this is where they met?

It appears that this picture might be from the early eighties (maybe around the time that Glen recorded / released "An American Trilogy" in 1984). The quality of this photo--which isn't apparent here--leads me to think that it might have been taken by a professional photographer. If any readers/fans know about its background including the photographer, please contact Erik or me at Glen Campbell Forums. (No copyright infringement intended.)

Below is a copy of this most beautiful photograph of Glen and Mickey Newbury enjoying a very relaxed and happy moment! A million thanks to Erik for sharing it and his Mickey Newbury/Glen Campbell memories with Glen Campbell Forums!

[Click this image once to view the entire photo.] 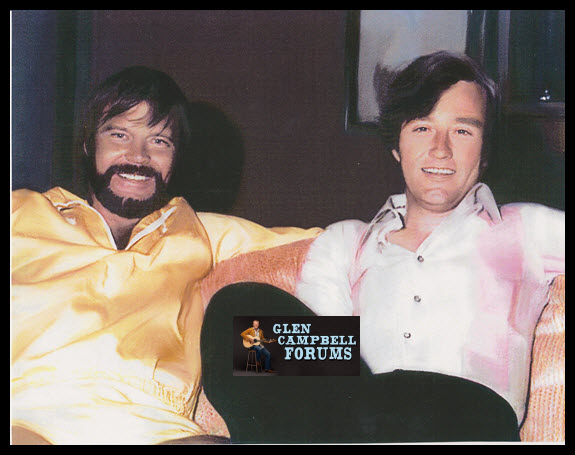 Listen to Mickey Newbury talking about the background of "An American Trilogy" on Vimeo at: https://vimeo.com/105990787" onclick="window.open(this.href);return false;. (It gave me goosebumps to listen to Mickey's story about performing his most infamous song for the first time!)