by Cowpoke
Here is something cool. Jeremylr's notes from a 2005 Glen Campbell concert at the Pebble Hill Plantation in Thomasville, Georgia. Thanks for sharing Jeremy! 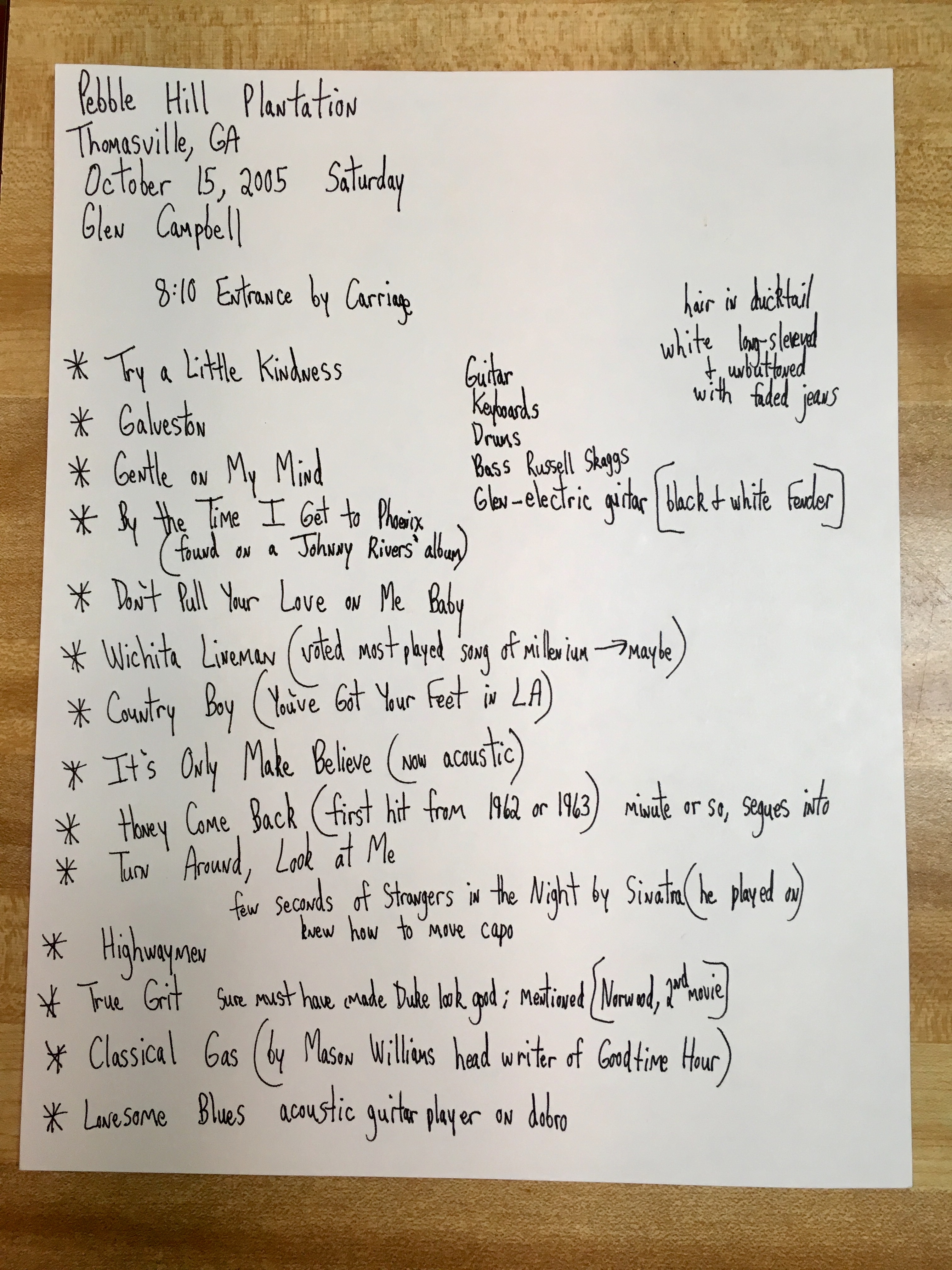 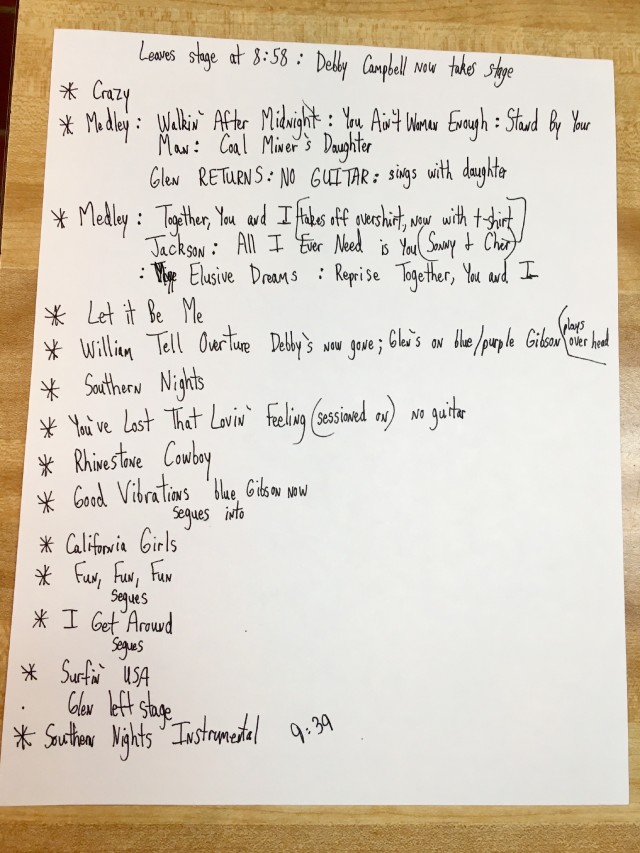 by Mike Joyce
Hey Nick UK,
I was at all those concerts too. Sorry we never got to meet. Who knows I could have sat beside you at one of them.
robduloc, I love the picture of you and Carol Kaye. Great to have a closer look at those hands that played the intro to Wichita Lineman,.

by Nick UK
Saw Glen's Concerts in Her Majesty's Theatre London, The Royal Albert Hall London, The London Palladium and The Pavilion Theatre, Bournemouth, England. A masterpiece in musical entertainment from a truly great Artiste! Thank you Glen, God bless you and yours. 'Wish You Were Here'.

by Dee
Rob asked me to post this photo of him and musician (and friend of Glen Campbell) Carol Kaye during the summer of 2001.
She looks very happy to be signing whatever you had asked her to sign, Rob! 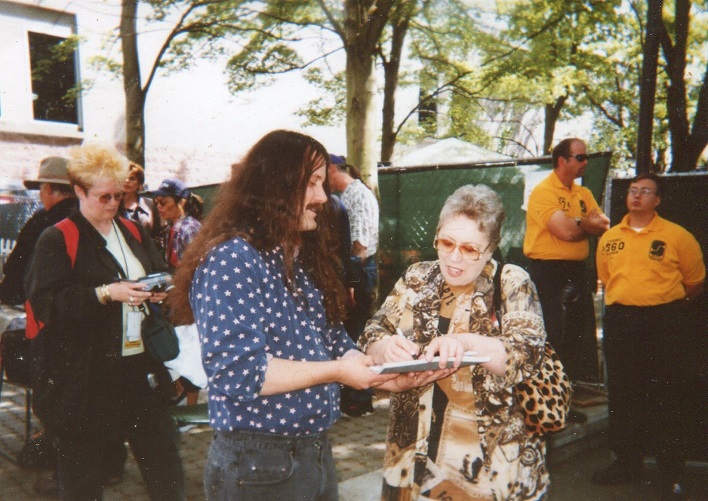 by robduloc
There is a wonderful video on YouTube of the Glen Campbell band performing The Question.

It is the perfect compliment. The keyboards, drumming, rhythm guitar, soaring harmonies, are all there!

After he left The Moody Blues, I heard Mike Pinder moved to Hawaii and became a Pastor. Look for his solo album "The Promise". It possesses a note of faith.

Upon listening to Campbell's arrangement, it is nice to think of him sitting around and listening to The Moody Blues like the rest of us die hard fans.

Yep, Campbell can really identify and channel a song.

by Mike Joyce
Hey, byJTB,
That is a wonderful early memory. How fortunate to be able to go to a concert at such an early age and see Glen in his prime. His songs are ageless aren't they!. I love to sing the classics when I am working or just driving around. I never tire of them. That says a lot to me about the quality of Glen's work.

by JTB
In 1972 I was 3 1/2 years old and Glen Campbell played at the Astrodome at the Houston Rodeo. My parents took me and my sisters to see him. He rode around the arena on a horse and "shook" hands with all his fans. I got to touch his hand. Glen Campbell was the first "Super Star" I knew. There was something so pure about his music that even as 3 1/2 year old boy got it, and I still find myself singing his songs today as I drive around town.

On a side note, my dad looked so much like Glen Campbell he got stopped several times in airports and was ask for his autograph.

I pray for the Campbell family every day after seeing the documentary.

by Mike Joyce
Welcome to the forums johann, What a wonderful story, I very much enjoyed reading your post. I attended all Glen's UK shows when Glen came over. Back then Glen used to do "Question" by the Moody Blues. It is one of those numbers which is fast and then goes to a slow section with a great guitar break in it. much like MacArthur Park in its structure. Glen nailed it every time. He also used to do Vangellis as well,the theme from Chariots of fire.great times. I hope you come back soon johann and share some more stories.

by Cowpoke
Tremendous post Johann. Glen really was the complete package, great songs, great singer, great guitarist, great entertainer.
And yes, very early in his career (around the time he was 15, 16 years old) he first moved to Houston with his brothers and played some clubs with his Uncle Boo. Thanks for sharing your concert experience here with us.

by Johann Uhrmann
I can recall attending one of Glen's shows in Houston at Jones Hall during the period 1983-1985. I believe it may have been a charity concert in order to generate additional revenue for the Houston Symphony Orchestra, whose regular venue was Jones Hall. I do know Helen Reddy opened for Glen. I'm certain of this, because the wife was a fan of Helen Reddy's and it was one of those 'you've got to do what you've got to do' moments. I sure wasn't a fan of Helen Reddy and cringed at the thought of sitting next to my wife while she sang along with "I am Woman, Hear Me Roar". Although I liked Glen Campbell's music, and had a few of his early recordings, frankly, I really wouldn't have normally attended one of Glen's concerts. I just wouldn't have expected it to be that great of a concert experience. But sometimes-'you've got to do what you've got to do'.

Was I wrong. The concert was fantastic. Glen had about thirty or so members of the Houston Symphony Orchestra string section with him, and he went from one hit to the next. The orchestral backing allowed him to play his hits to perfection, as well as "MacArthur Park" and some Moody Blues('Knights in White Satin', maybe?) and a few other tunes by other artists, some of which I'm pretty sure weren't ever recorded by Glen. His solo guitar work was flawless, shimmering and seemingly effortless. I was stunned. And with a story or joke between just about every song, the Houston audience loved it. I'm not sure if Glen lived in Houston at some time prior to that, but if I remember he mentioned something about having lived(or maybe played?) at some 'little place over here down off Telephone Road'. It was a great show for a very appreciative audience, and the audience made Glen feel 'right at home'. And Glen reciprocated. The concert felt as if Glen was playing for you in the comfort of someone's living room.

I had attended quite a few rock and blues concerts by well known artists, and I saw many artists before they became 'superstars' in the late 60's-very early 1970's Cream's Goodbye concert, BB King, Albert King, Muddy Waters,(OK, they were already 'superstars'), Jeff Beck with Rod Stewart on vocals, The Allman Brothers a couple times while Duane was still alive, Led Zeppelin's first major US tour in 1969, Johnny Winter's first major tour in 1969, Elton John's first US tour in 1970, Jethro Tull, Ten Years After and many others. I play a little guitar myself, and occasionally the subject of concerts(and guitarists) comes up in conversations with other musicians. Most of these guys are rock players, and most of time they're younger than I am. When I'm asked "what was the best concert you ever went to"-I tell them-"Glen Campbell in Houston in about 1984 or so". I often get a bit of an odd look from them-but it's true. It was the most enjoyable concert I've ever attended. Thank you, Glen.

And the wife didn't sing "I am Woman, Hear Me Roar"-thank God.
All times are UTC-06:00
Page 1 of 3
Powered by phpBB® Forum Software © phpBB Limited
https://www.phpbb.com/