Your Stories and Memories about Glen

Thank you, my friends.

Awhile back, I submitted a post that I saw a Glen Campbell YouTube on for a TNN Crook & Chase from '96, you have to take into account the adrenalin I'm operating on and when I'm off a few years, I Think it's important to note the segment was 1993 and the album that he was promoting was Glen Campbell Somebody Like That which has the very cool album cover picture of him dressed in a long tuxedo jacket, white pants and white shoes like a Riverboat Gambler.

There is so much in the segment my original post didn't mention, he talks about completing Rock-A-Doodle and a cute a story about when his daughter saw it for the first time, I would like to note Glen Campbell's longtime bandleader T.J. Kuenster wrote most of the music for the film, it is one of the next DVD's and OST CD's that I plan to buy.

I can remember renting the film for my toddler in the mid-nineties for our toddler and when I was rewinding it thinking that I will have to but and own it one day!

This is a big moment for me, when something like this is open for discussion and leads me into a bigger room, I can tell you one thing, the emotional part- it appears John Barry handled the main arrangements and compositions for the motion picture The Golden Seal, his lifelong work will show or is a testimony to the range of emotion which music can draw you into, ultra-romantic, and so it isn't lost on me John Barry would want to work with Glen Campbell who has some of the most beautiful songs and arrangements floating in the stratosphere, the 45 single of Letting Go that I am looking at is nine dollars, I will call up how much the CD of the soundtrack is going for, Glen Campbell and John Barry on the OST of The Golden Seal, one hot property, I would like to thank Mike for starting this thread, reinstating memories new and old. and firing up those engines!

My apologies, Rob -- The Golden Seal full soundtrack was released on CD with "Letting Go". With a little more research now that I know about a CD version, I learned that a CD was released in the U.K. and discovered the following information on an ebay listing for the CD (listed for approximately $60. excluding shipping!):

"This is the very rare, OUT OF PRINT original score CD from the 1983 film - this excellent original score remained unissued on this format until Intrada finally released it in 2008 as one of their highly collectable, limited edition "Special Collection" series... just 2000 copies were pressed - all of which are now long SOLD OUT." "Expanded to include extra music never before released."


Thanks again for your great question!

It has been released on CD, Dee. I believe this is it:

Letting Go is one beautiful Glen Campbell song! Cowpoke or another member, please correct me if I am wrong, but as far as I know, it was released in 1983 on the 45 that Rob is describing and also on the movie's soundtrack album (LP and also in cassette format) titled "The Golden Seal" and is the only Glen Campbell vocal on it. This LP shows up on ebay from time to time. It's not on CD.

When this song plays during the movie, it brings tears to my eyes; it's heard during a very moving scene.

What I don't know about -- you've raised a good single to discuss -- is information about the B-side of the 45, "Face to Face". It is an instrument from the film/soundtrack. I don't know why Glen Campbell is credited for it on this 45 from the U.K. (He is not credited with playing on this instrumental on the LP.) 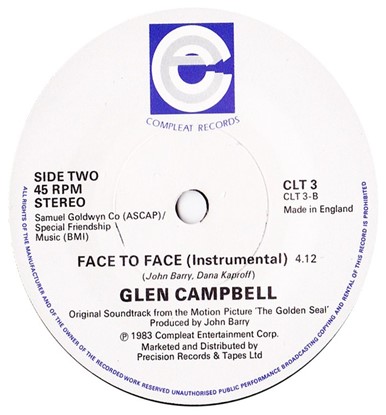 
If you haven't heard this song yet, it is posted on YouTube at: http://youtu.be/DRlz5oFf4E0" onclick="window.open(this.href);return false;

Good luck with winning the 45 with a picture sleeve!

Thank you Mike, for your reply, and support.

I saw a thread where a person grew up in a small town and by a certain age started collecting all the Glen Campbell albums that she could get her hands on, the majority compilations. I respect her town for making sure the shelves remained stocked over the years and I appreciate the void that a compilation fills, favorite songs to play over and over or stick out in the mind, and find which albums where they first appeared, I do know there are a number of Glen Campbell 45 singles that have songs you can't find anywhere else and that is an exciting revelation, I have my eye on one right now, Glen Campbell Letting Go 45 single from the motion picture The Golden Seal, nice picture sleeve of him performing live on stage, I would be interested to learn if this song made it to CD!

Have a wonderful week everyone.

robduloc, that is great news on getting those albums.I didn't think they would be available as sealed records these days.
I must say I loved basic when it came out. My brother actually bought it for me for Christmas. Nicest thing he ever did for me. Can you fool is wonderful and I'm gonna love you are my favourites. In someways I wish I was in your shoes now as I remember the magic of getting those albums at the time. I found Norwood soundtrack as I passed a second hand shop and saw it displayed in the window. It was used but I had never seen another copy any where else.
While I worked at a shop that sold records, I remember unpacking a delivery of LPs and at the bottom was a copy of Highwayman. I didn't even know it had been released.
robduloc, enjoy these moments they will become your joyous memories.

I greatly appreciate reading your in-depth posts. You help me to remember or to learn new things....for example, maybe for the first time in years, I picked up my By The Time I Get To Phoenix album to really examine its front and back covers. I had never thought previously about how perfectly the cover art connects with the Phoenix song! I believe the front cover also ties in well with one of my favorite Glen Campbell songs, "Homeward Bound". These are two magnificent songs by two different songwriters, and for Glen and Capitol Records to have put both songs on the same album, back to back, is genius, isn't it? Thank you so much!

Glen Campbell Basic and Somethin' 'Bout You Baby I Like are my favorite albums right now, I suppose there will be a series of firsts as I strive to buy and own and listen to all his works, I recently received in the mail factory sealed never been played vinyl copies of Glen Campbell Highwayman, Norwood OST, Too Late To Worry- Too Late To Cry, Somethin' 'Bout You Baby I Like and It's The World Gone Crazy, a real emotional experience to hold in my hands, study the contents and crack open.