A look at the history behind many of the guitars Glen has used throughout his career.
Post Reply
7 posts • Page 1 of 1

This picture started floating around recently...#2 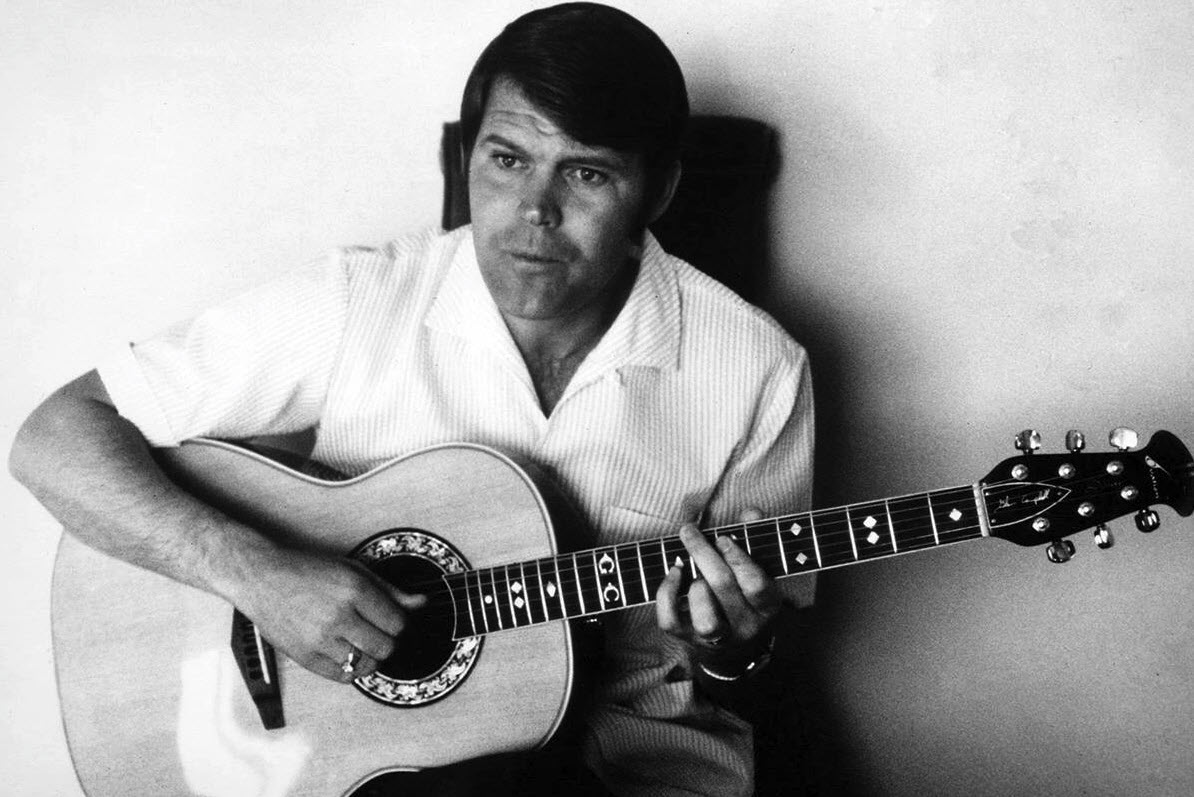 Glens first signature acoustic came after Charlie Kaman took an Ovation to Glen for him to try out. When Charlie got back with Glen, Glen expressed his liking for the guitar and Charlie asked him..."What would you like to have?" And the first proto, the "Glen Campbell Deluxe Balladeer" was R&D'ed and delivered to Glen. It is evident that Glen had finally found an acoustic he could call his. He performed with it on the Goodtime Hour and took it with him for photo ops. His affection for his Ovation, his growing popularity and the increased audience tuning into the Goodtime Hour every week, began to propel both Glen and Ovation into prominence. 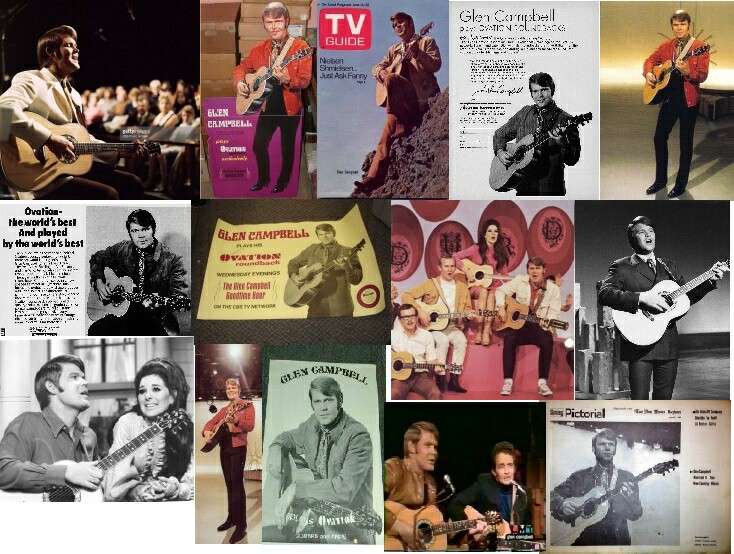 
Louis Shelton, who was a budding guitar player, left Little Rock in 1958 and moved to Albuquerque and Santa Fe, New Mexico, where he began a band. He met Glen Campbell, a fellow musician and native Arkansan, while in New Mexico. Later that year, he decided to follow Glen to Los Angeles, California, hoping his friend could help him break into lucrative session playing. However, his hopes for a quick transition into studio work did not materialize. But, with a little time, he became a renown session player...working his way into the Wrecking Crew, as Glen was leaving. Louise ended up playing music for several TV shows, including the Goodtime Hour. 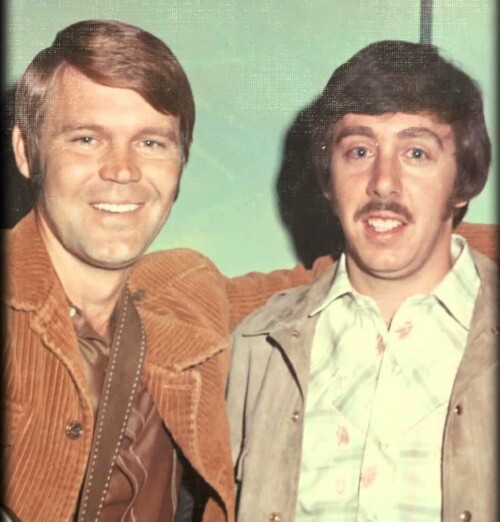 Around that time, Glen gave his first prototype to Louie, keeping the 2nd one.

Sometime around 2002, Louie settled down in Nashville and decided to downsize his guitar collection. Wayne Reid was fortunate to be able to purchase Glens 1st prototype from Louie. Below are some pictures of the very first Ovation Deluxe Balladeer that Charlie made to Glen's specs. Many thanks to Wayne for sharing these awesome pictures. 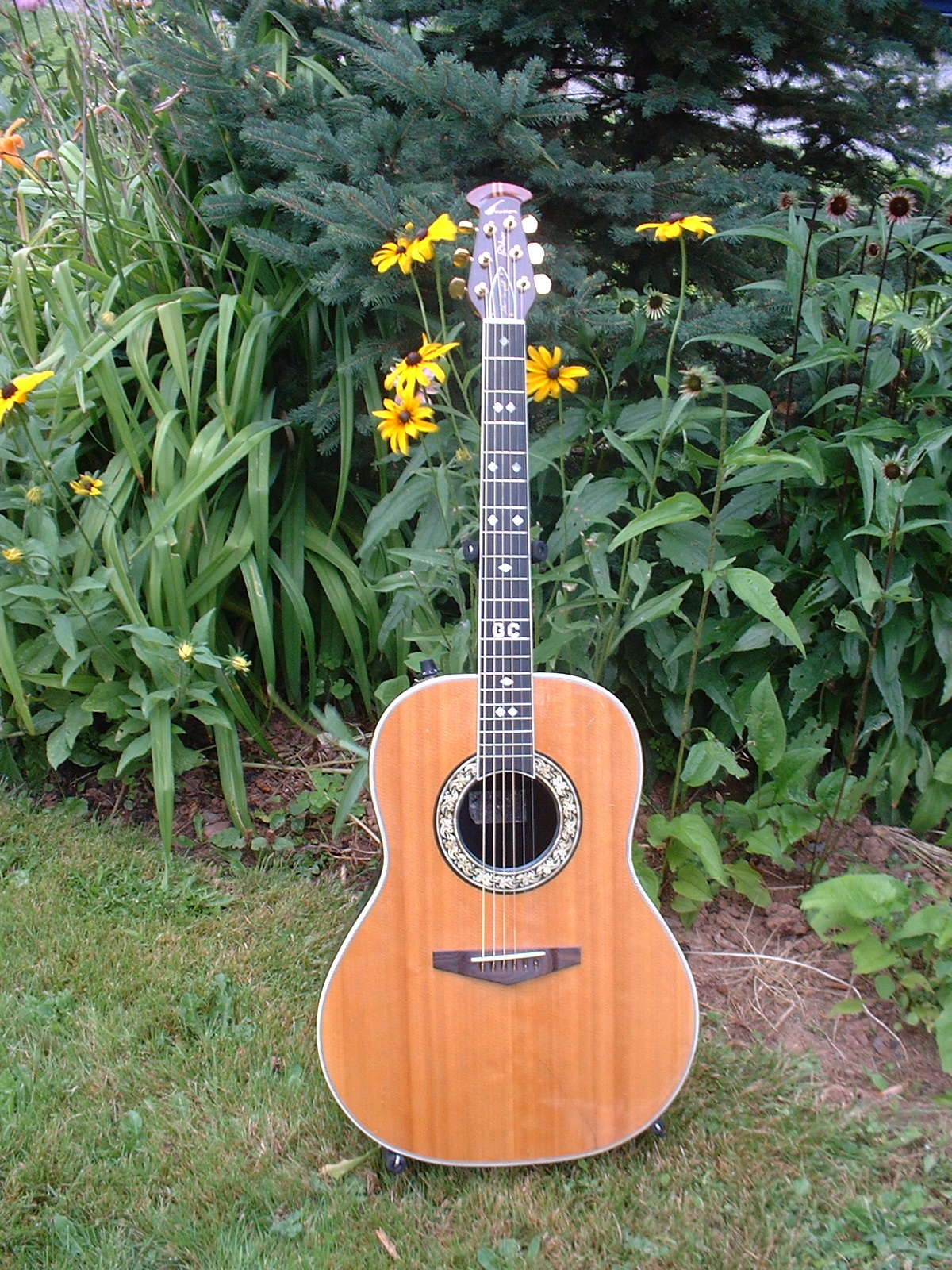 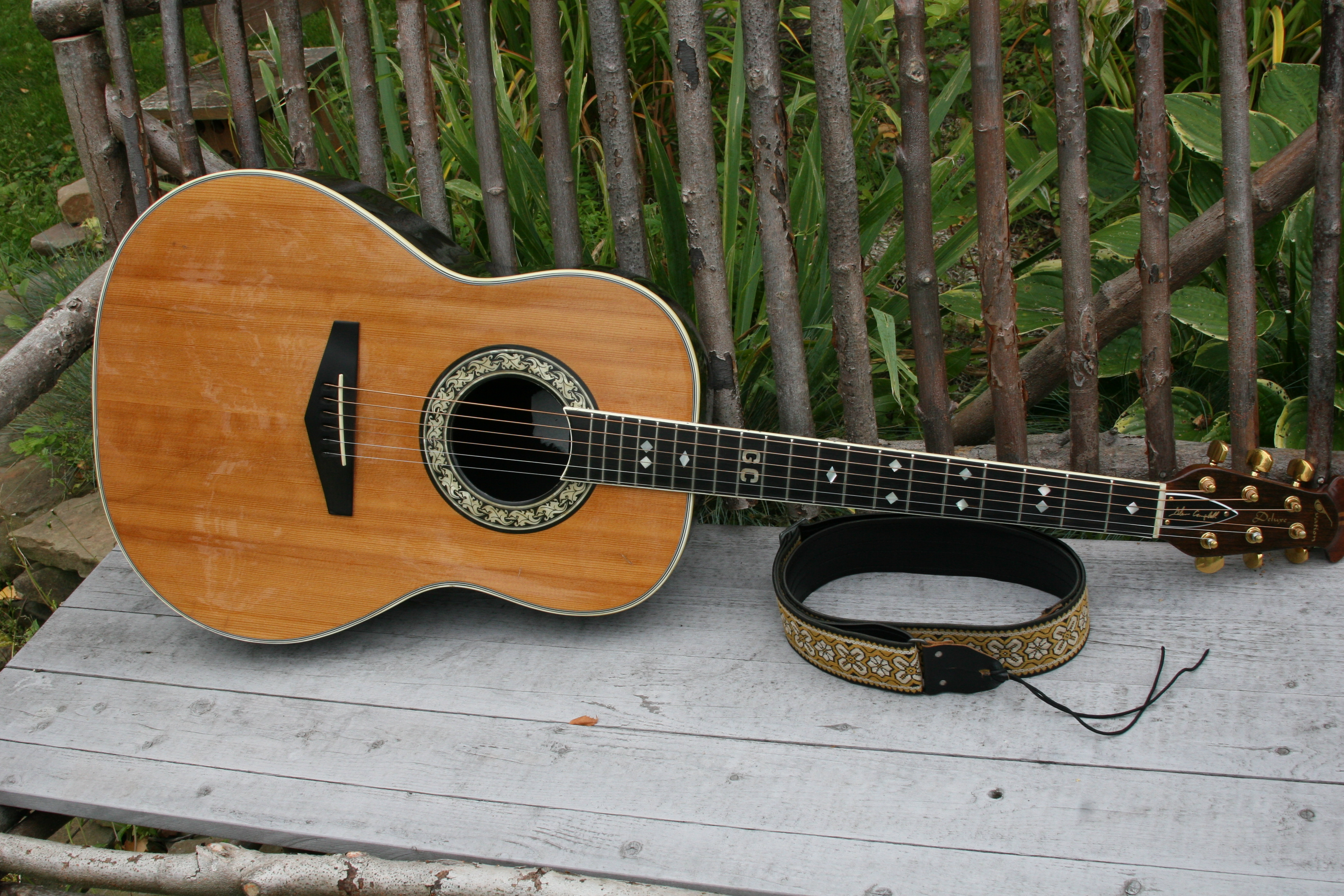 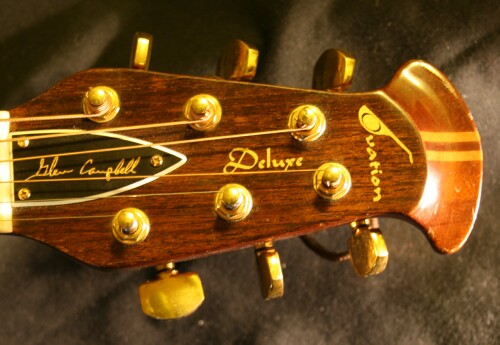 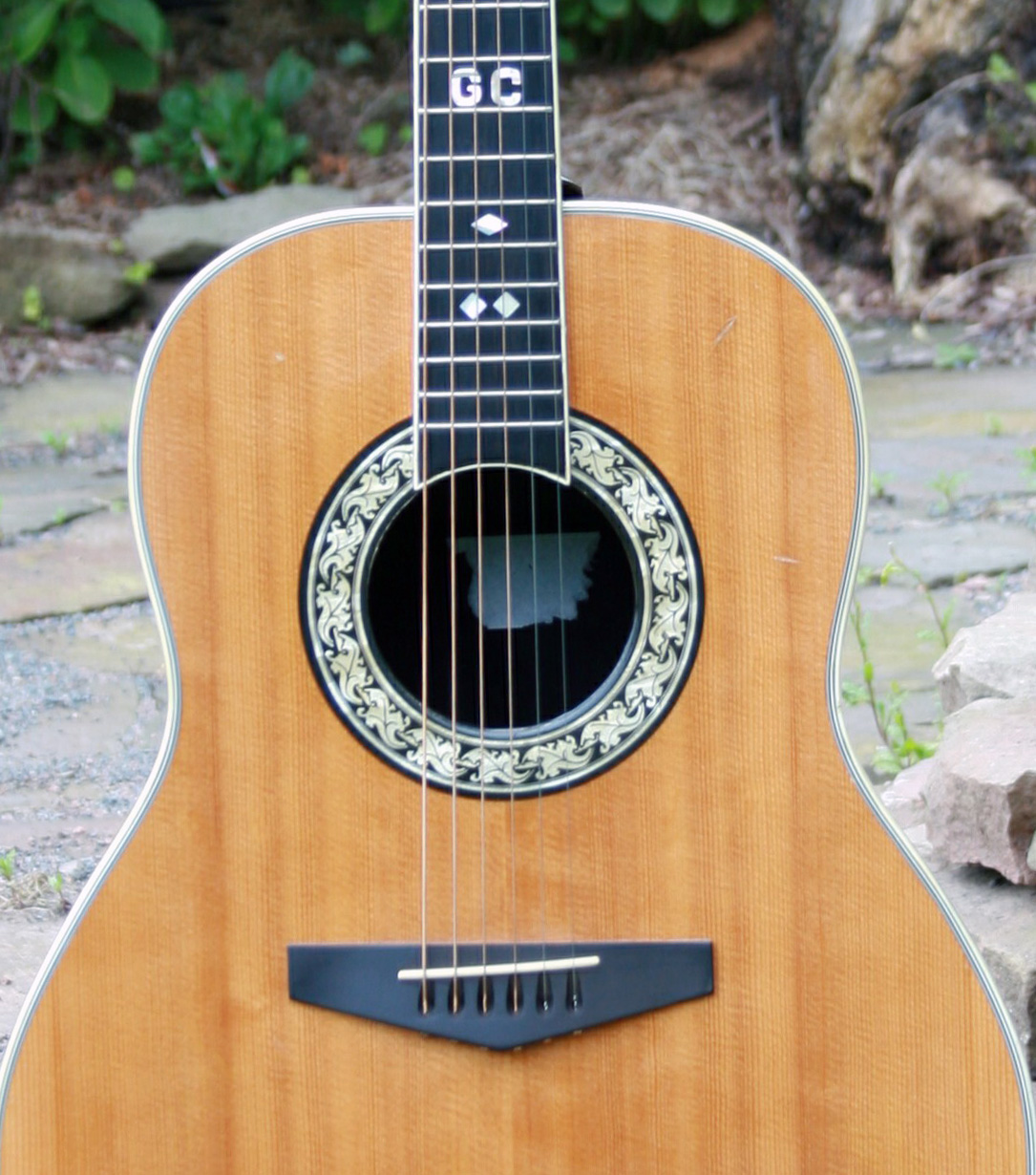 Glen kept the #2 Prototype Glen Campbell Deluxe Balladeer until recently, when it was put on display at the Country Music Hall of Fame.

Here are some publicity pictures from the Goodtime Hour: 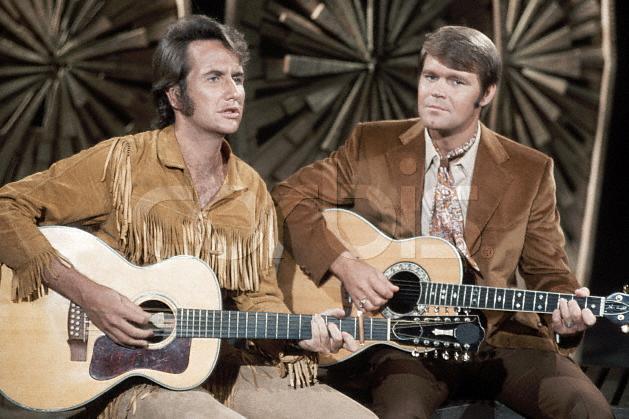 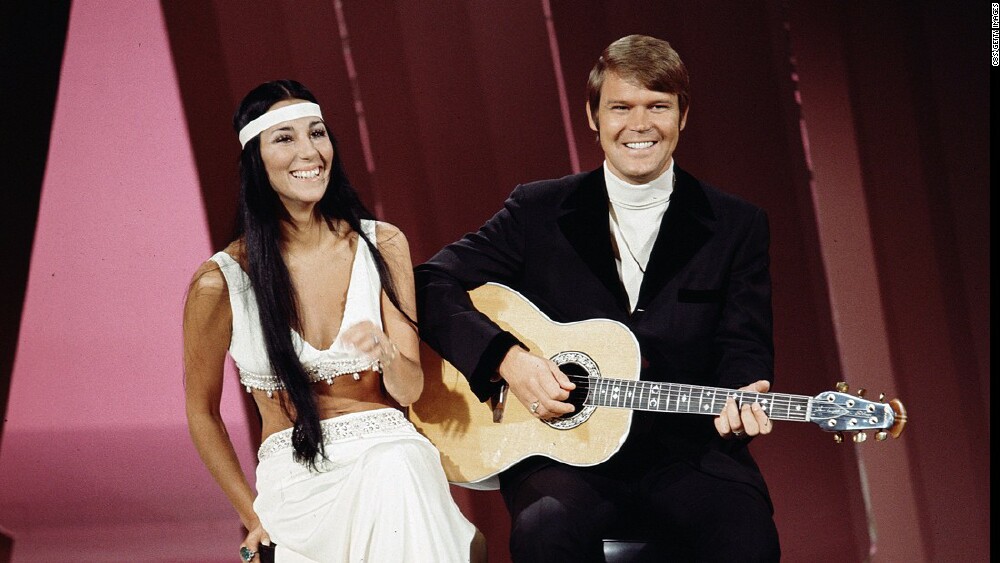 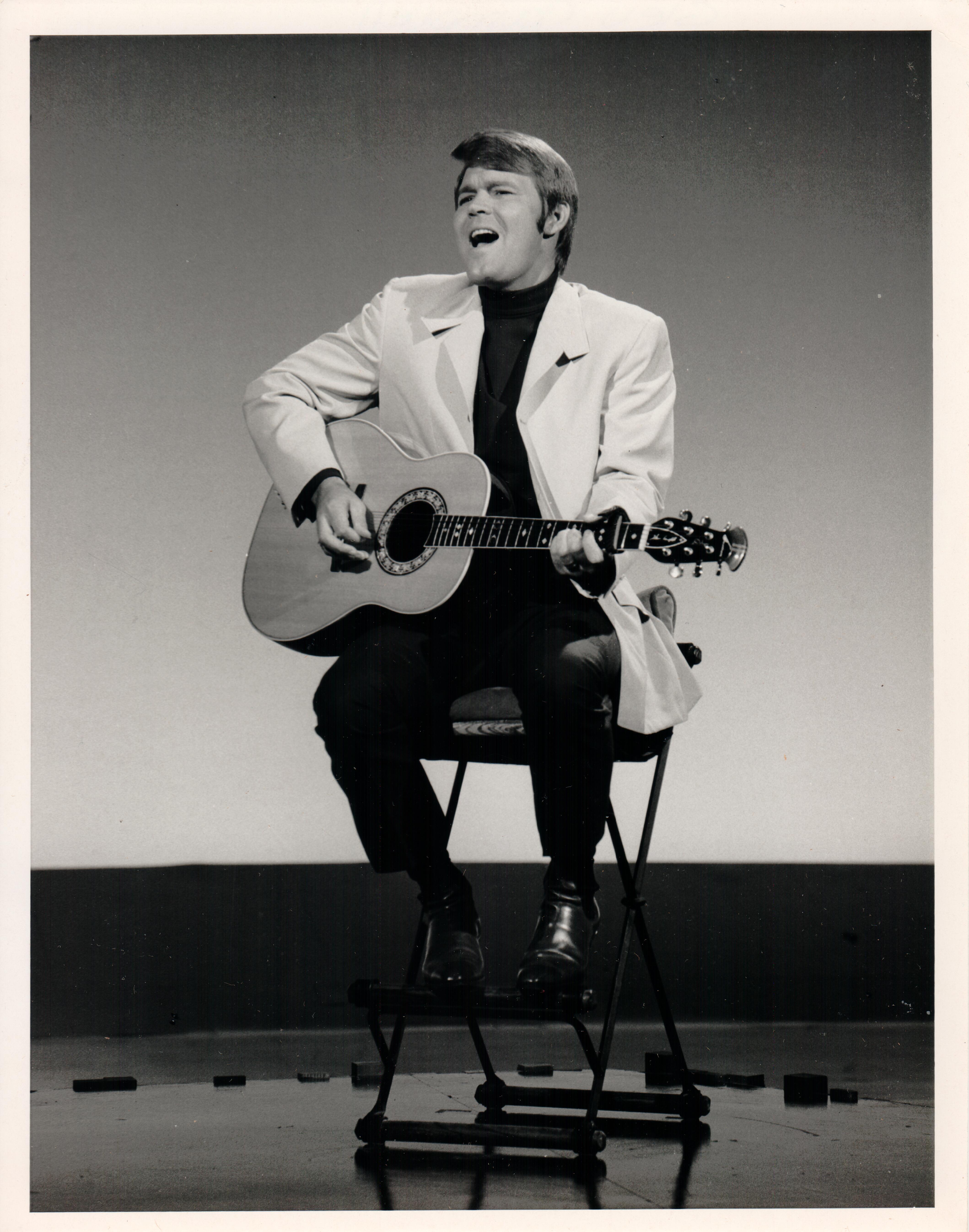 In 2011, it appears that the neck was broken. It was sent back to Ovation, where it was repaired. 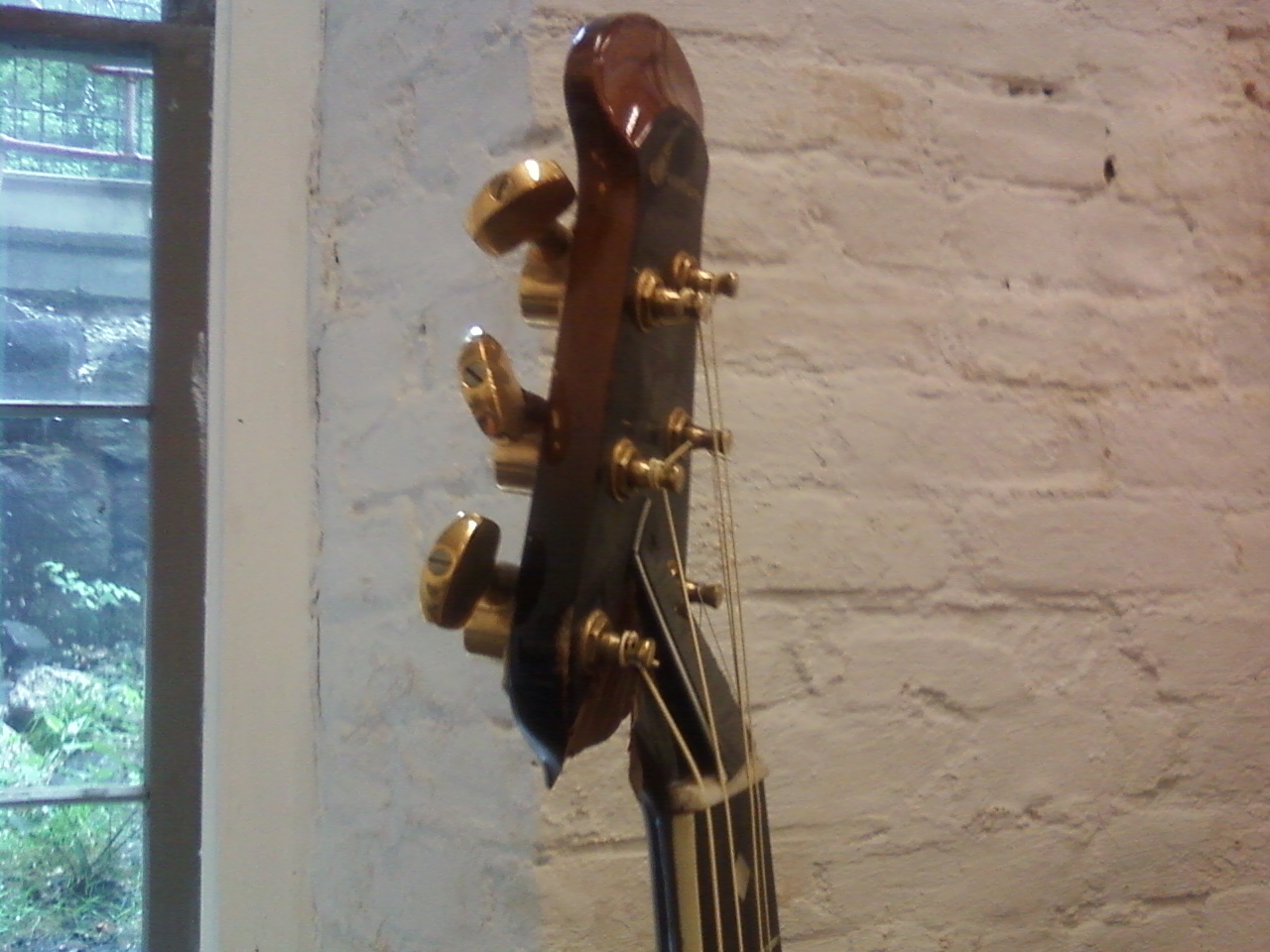 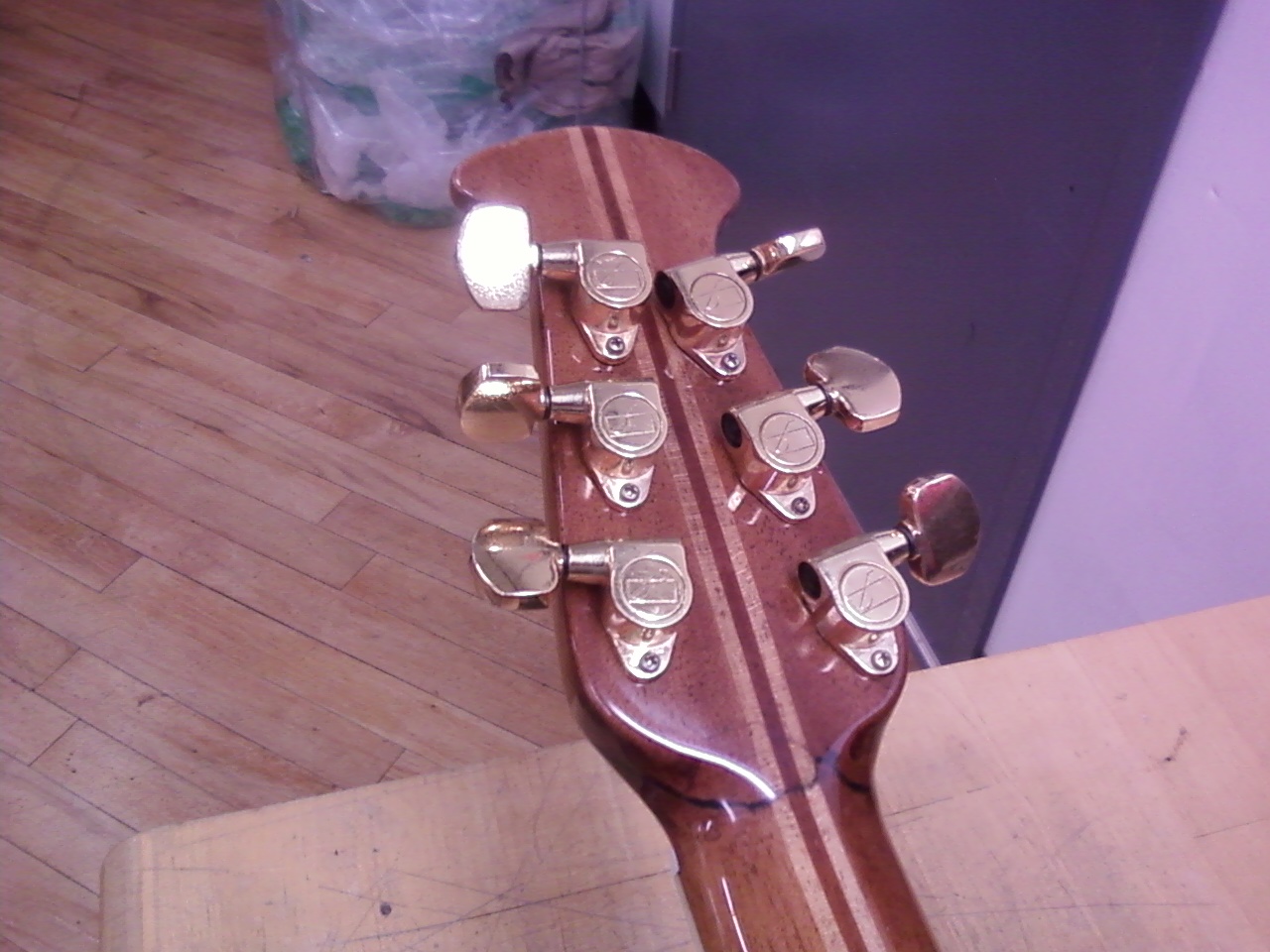 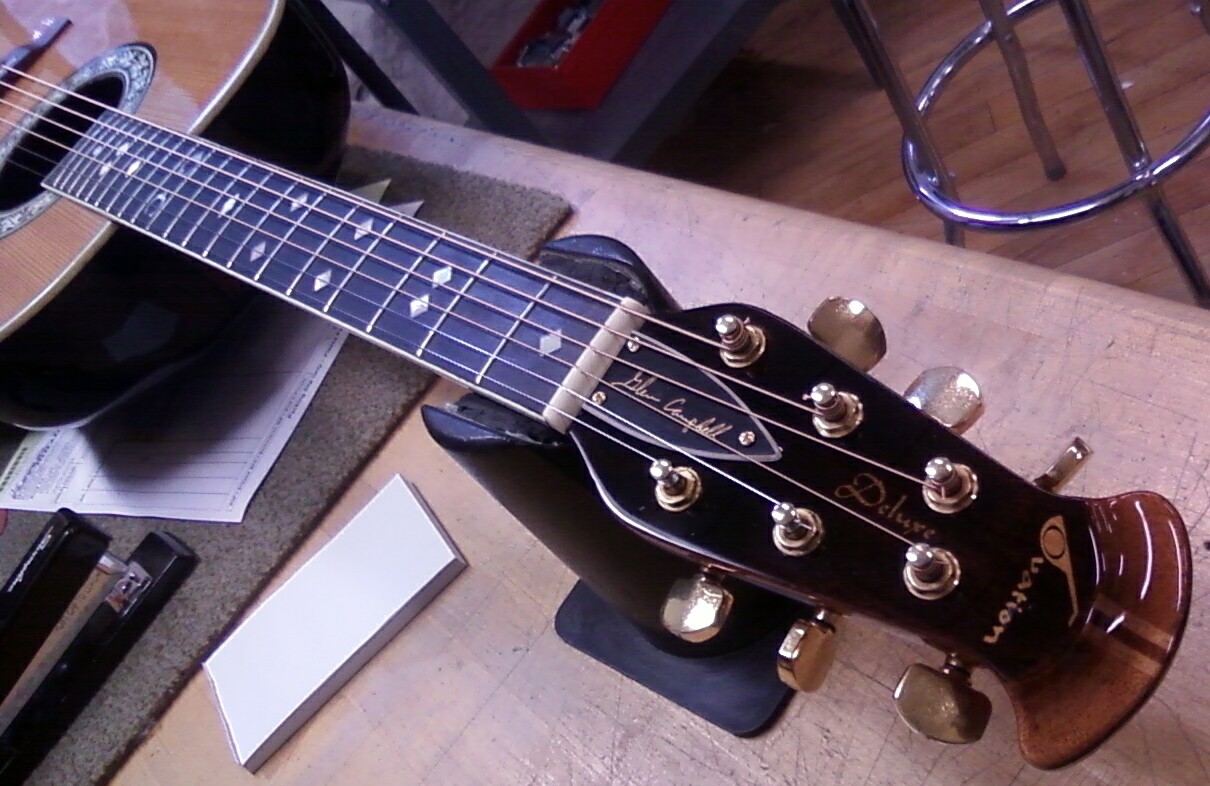 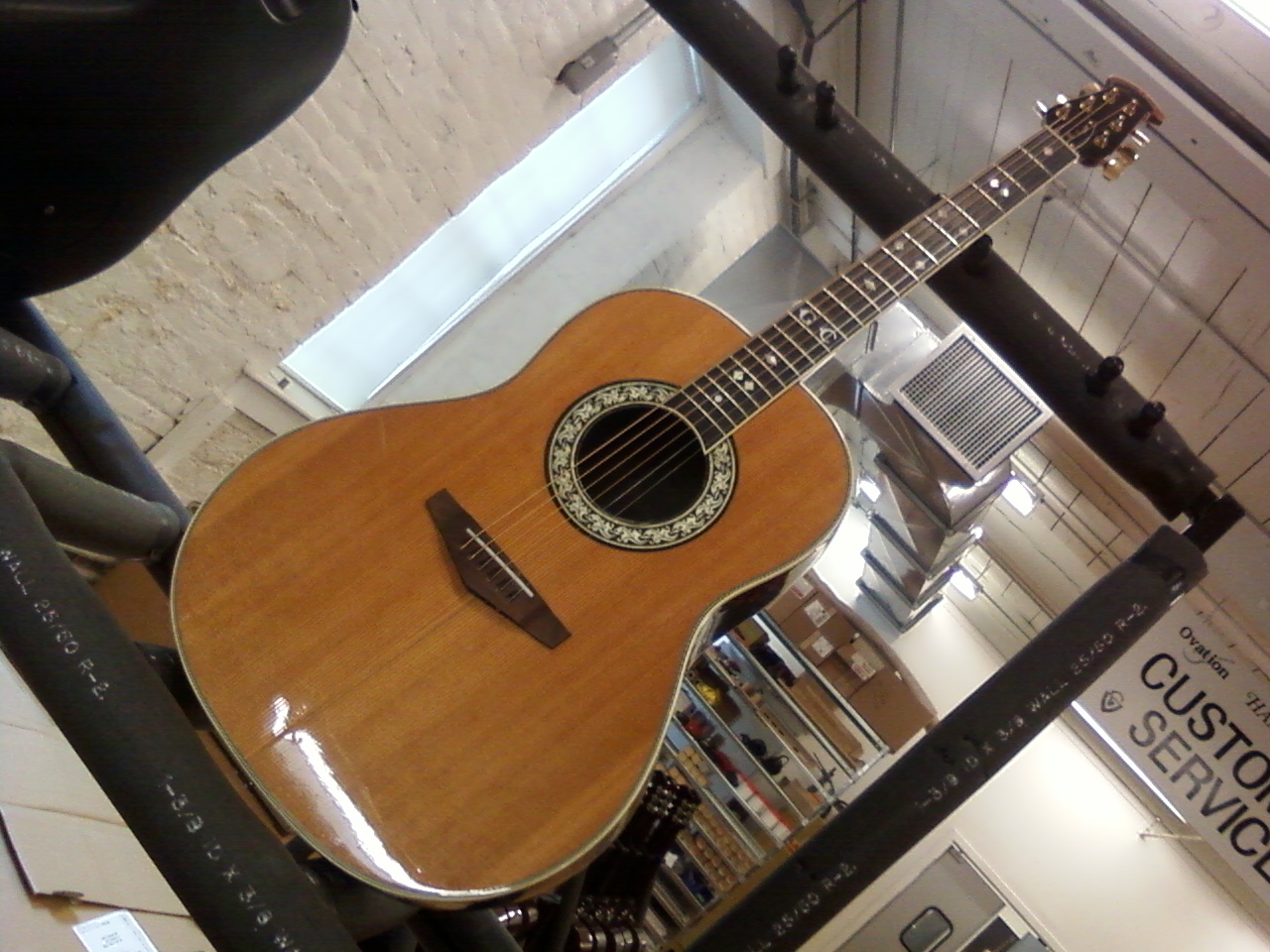 We know Glen had the guitar around 2012/13, prior to selling his Malibu home, as the GCDB appeared on the staircase.


And we can assume that at some point between the staircase shot and moving to Nashville, Glen allowed this guitar to part of his display at the Country Music Hall of Fame.

Thanks to Wayne Reid for providing us some new pictures of prototype #2 history with Glen.

You can download the pic from the Getty's. Then once you open it the watermark on the left is gone and it looks much better that way.

Yes Jay... incredible quality. Looks like it could have been taken yesterday.

I could not see the photo. I believe it is this one?

That IS an awesome picture. I too have never seen it before. Thanks for sharing it with us.

FYI, Getty Images is very strict about using their pictures on other websites. They will randomly sue websites that use their pictures, resulting in high fines. Recently, they changed their policy a bit and now allow for a lot of their pictures to be embedded on other websites for free, but then you have to use a specific piece of code to do so. Sadly for this specific picture, the copyrighter owner does not allow embedding. In that case the best option is to simply provide a link to the photo on their own website gettyimages.com.

PS: later I WAS able to see the photo you embedded. I removed the [img] tags just to be safe with Getty. I hope you understand!

Here's an awesome pic of Glen with the GC Deluxe proto... the quantity is stunning. I have never ever seen this one before.

Glen had two personalized Deluxe Balladeers, it appears. Both of them were prototypes. There were subtle differences. one of the differences was a different font used in the "GC" 12th fret initials and the first proto was missing the 19th fret inlay.

Here is a rare video of Glen playing the second prototype, while Merle Haggard is playing the first.


This is one of Glen's Deluxe Balladeers. It was the first prototype. (courtesy of Wayne Reid)

Here is a picture of Glen playing that guitar on the Glen Campbell Goodtime Hour: 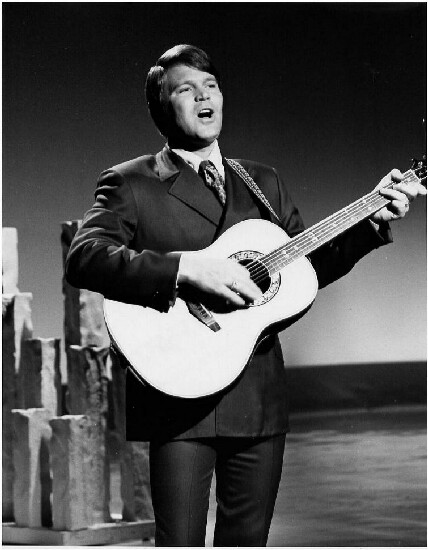 And Ovation used Glen with this guitar for numerous advertising campaigns 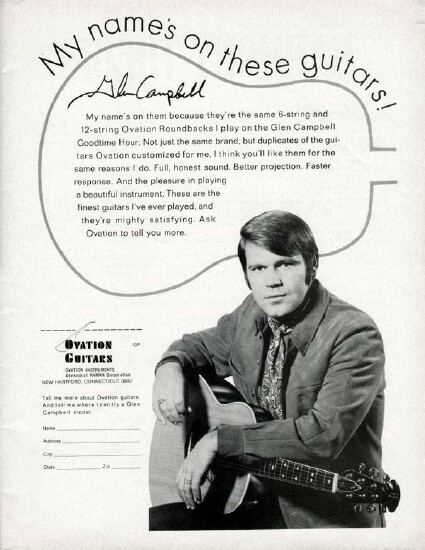 Here is Glen playing it with Stevie Wonder in 69.

In 2011, Prototype #2 suffered a headstock misfortune and was sent to Ovation to be repaired. Here it is, prior to be returning to Glen. 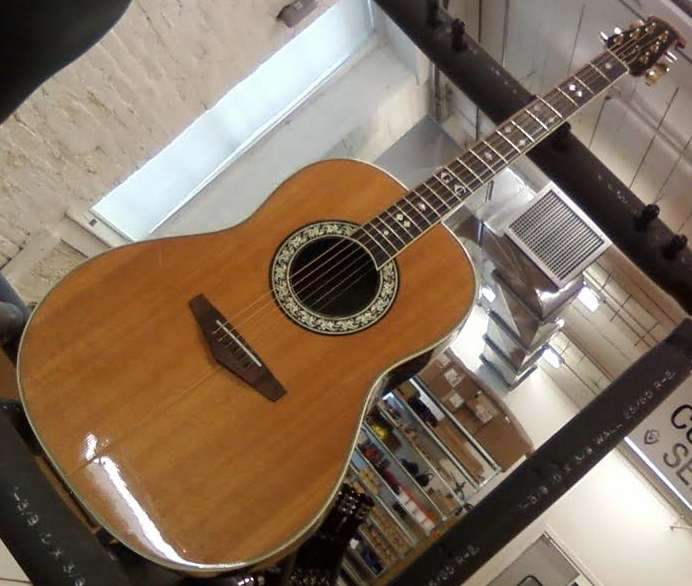 Glen still had the 2nd prototype Deluxe Balladeer, when it appeared in the Malibu staircase picture 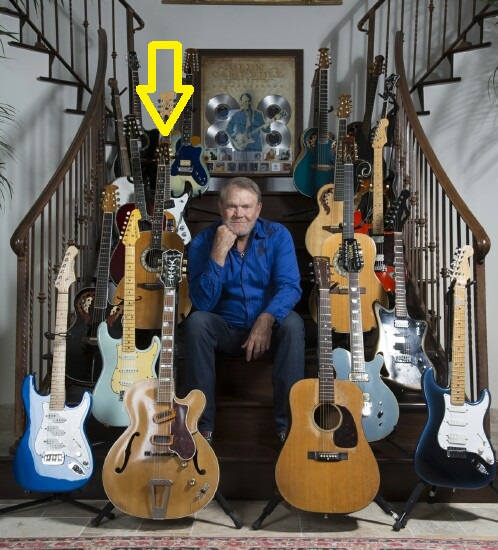 
Thanks to David Witko for (kind of) allowing me to use the information on the Glen Campbell Deluxe Balladeer, which he has researched on his informative Ovation Gallery website.