by jay
Hamer's, reputation back in the day, was if someone has deep enough pockets, they can have a guitar built that is custom built to their wishes. Rick Nielsen (of Cheap Trick) had them make some massively tricked out guitars for him. He had to be one of Hamer's biggest promoters. Glen obviously loved the feel of the Bluebird neck, that they recreated (the shape) and Jeff crafted the rest of the guitar (to Glen's preferences) around that neck. Actually, it is a very clean, simple design. So this wasn't a modified guitar as such...it was a new, one of, custom guitar from the craftsmen at Hamer. Here are a few of Ricks guitars (I believe he played on Ghost for Glen/Julian): 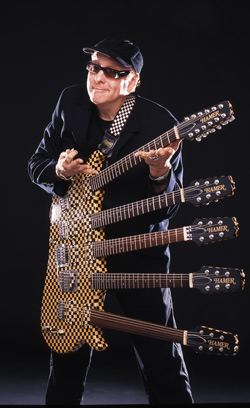 by jay
Hamer Guitars was founded in 1973. Like many other guitar companies, they produced guitars similar to major brand guitars. Unlike many other companies, they were generally considered to be the first "boutique" electric guitar brand that specifically catered to pro musicians. Kaman Music Company acquired them in 88 and then Fender acquired Kaman in 2008, only to shut Hamer down in 2013.

(A big thanks to Jeff Dayton for sharing the history of this guitar) Around 1991 American Airlines damaged one of Glen's Ovation Bluebird 12's, by crushing the neck on it. Jeff sent the damaged neck to Hamer (which was part of Kaman Music Corp at the time). He asked Hamer to copy the Ovation's neck profile (the Bluebird was not a production guitar) and design Glen another electric 12 string with:

1. Two Mini Humbuckers (like the Les Paul)
2. One Volume
3. One Switch
4. A Top Loaded Bridge (this was so that Glens hair would not get caught in it when he played the William Tell Overture. They actually used an old Ovation bridge for that.)

Glen used this Hamer 12 string until his last concert.

Playing the William Tell Overture with the South Dakota Symphony

As seen on the stairwell at his Malibu home. 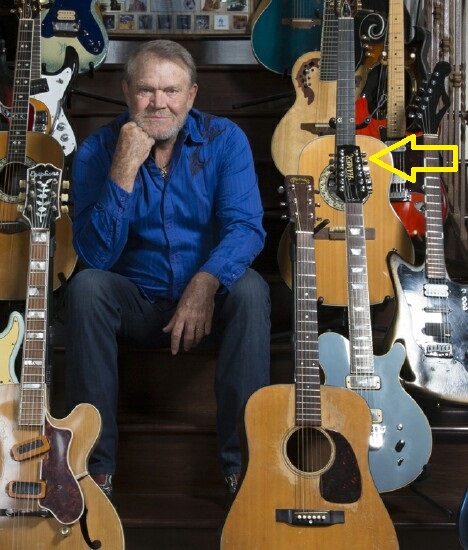 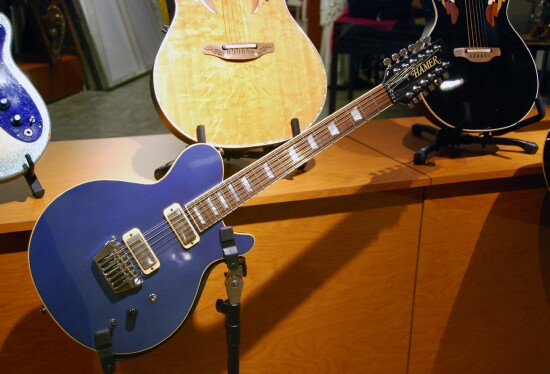