psavmd wrote:I am a surgeon. My father-in-law suffers from this illness. 3 years ago, he was very near death. He could not swallow his own secretions. He is on aricept and namenda. I started him on large doses of coconut oil and he made a 180 degree turn around and is still alive today. The science behind coconut oil makes perfect sense. Coconut oil is converted to ketones which supplies the brain with food and keep it functioning. I hope this gets to Mr. Campbell's family.

psvamed -I have many patients with many forms of cognitive impairment - I would love to know more about your use of coconut oil - what is the dose and frequency? As a hospice nurse I understand that my patients are in the last phase of their lives but I am of the mindset that my first priority is to promote quality of life. If I can make med changes that will give a person a week - a month - or even more to improve life for my patients and families I get very excited.

I also watched Glen's story last night and was so sad. I see the same symptoms of decline in all of my patients - some with Alzheimer's, a lot with Vascular Dementia, a few with Fronto-temporal lobe dementia and, as another mentioned Lewy Body dementia. The common denominator is cognitive impairment but each have their own little "quirks." I think it's so important to know the specific disease so we can prepare the families for what lies ahead. It's difficult to have everyone just 'lumped' into a dementia diagnosis. Some of my patients have become non-verbal, others don't remember how to chew and swallow food and fluids, others have lost the ability to walk. The symptoms go on and on as I don't need to tell any of you here.

I have loved Glen and his music, his TV show, and his phenomenal musical talent with his guitar. I'm sure I wasn't alone in the beginning of the film wondering why the family would have him perform at all the concerts with his declining status. I changed my mind when I saw Glen refusing a shower and then a few hours later performing. I have used music therapy with my patients but now feel I have not put enough focus on it. I will now make a more conscious effort to reach my patients with music as it is the universal language.

Hugs to Glen, his family, and all who are dealing with cognitive decline of any nature. There but for the grace of God go I ---- for now! Who knows what the future holds!

I watched the CNN show on the decline of Mr. Campbell, but after 30 minutes, I recognized so many of the features from my late husband's suffering that I could no longer watch, enormous sadness, admiration for Kim for doing exactly what I did and so many other caregivers do for those suffering from this horrible disease. But I wanted to take a moment to say that while Alzheimer's robs families and vibrant beings of their loved one's memories, another disease, a cousin of Alzheimer's, is just as devastating and never mentioned or looked at by the media. That disease is Diffuse Lewy Body Disease. I sincerely wish media giants such as CNN and USA Today would take a moment and look at this disease, which is often thought of at first as Parkinson's or Alzheimers, but does in fact stand alone as a disease as devastating, and perhaps more so than either Parkinson's or Alzheimers. Yet, no one hears about it.

Finally, I wish to tell Mrs. Campbell how much I admire what she has done for this man. I know personally how utterly exhausting this disease is to care for and how one is pulled down into [...] while looking for any solution to the myriad of physical, emotional and psychological problems that plague those with any of the brain diseases. It is THE MOST difficult journey to take on and it CAN consume you and take your soul with it. I understand Mr. Campbell's daughter's desire to bring her father home, and I understand how loved ones honestly believe they can handle the disease's progressions. They can't. But I understand how they believe they can.

I fully support Mrs. Cambell's decision to place her husband in a facility better suited to his needs. I made that very difficult decision several years ago for the very same reasons she did. I was exhausted, my late husband was becoming unpredictably paranoid and dangerous, there was perhaps 15 minutes of him napping followed by 4 hours of wild behavior around the clock for months. It never stopped. It just got worse and more unpredictable until he was a danger to others.

We all make this journey if we must, out of love for the ones suffering, but everyone makes a personal decision when placing or not placing someone in a home for others to care for. No one should be judged on that decision and everyone should fully support the decision, no matter what is decided. My late husband was much better off in a nursing care facility BECAUSE I was able to rest and function as a normal human being. Instead of being so exhausted I could not see straight (and still have to take care of him no MATTER how tired I was, no matter the time of night or day), I was able to visit him and smile, walk with him, take a meal with him and bring him joy instead of tears....which is where we were when I got to the end of my abilities.

No one, not his daughter, not his best friend, not even his family, should tell Mrs. Campbell what to do and when. Mr. Campbell has no idea where he is anymore. Removing him from that facility will do more harm than good as he has adjusted to a calm and predictable place. He will always tell you he wants to go home. His brain is stuck on what I called memory echos. It is no longer a reflection of any reality but a random set of random memories with no further relevancy. I know. Very very hard to accept by loving family members. But true nonetheless.

Mrs. Campbell's actions should be respected. My best wishes to her for that support. I never had it.

psavmd, thanks for your message and welcome to the Glen Campbell Forums. How wonderful that your father is still here. Recently, in a Q&A on Facebook, Kim Campbell said this about the subject. 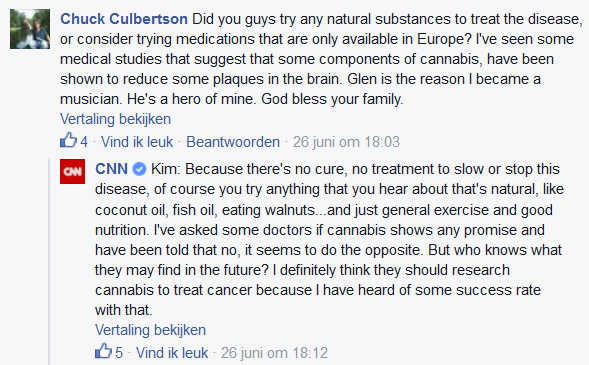 PS: We will move your message within a few days to the "Living the Legacy" subforum which is dedicated to Alzheimer's Disease related posts. Thanks again for posting!

I am a surgeon. My father-in-law suffers from this illness. 3 years ago, he was very near death. He could not swallow his own secretions. He is on aricept and namenda. I started him on large doses of coconut oil and he made a 180 degree turn around and is still alive today. The science behind coconut oil makes perfect sense. Coconut oil is converted to ketones which supplies the brain with food and keep it functioning. I hope this gets to Mr. Campbell's family.

Return to “Living the Legacy”