by jay
Camel Rock Casino sits outside Sante Fe New Mexico. It gets its name from a sandstone formation...that looks like a camel... which is located right across the highway. 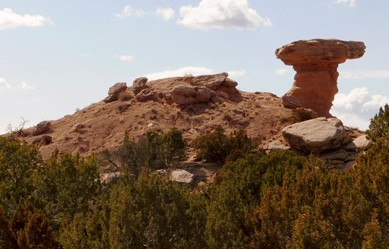 
Not the type of pre-concert PR one would wish for...I imagine he put on a heck of a show. 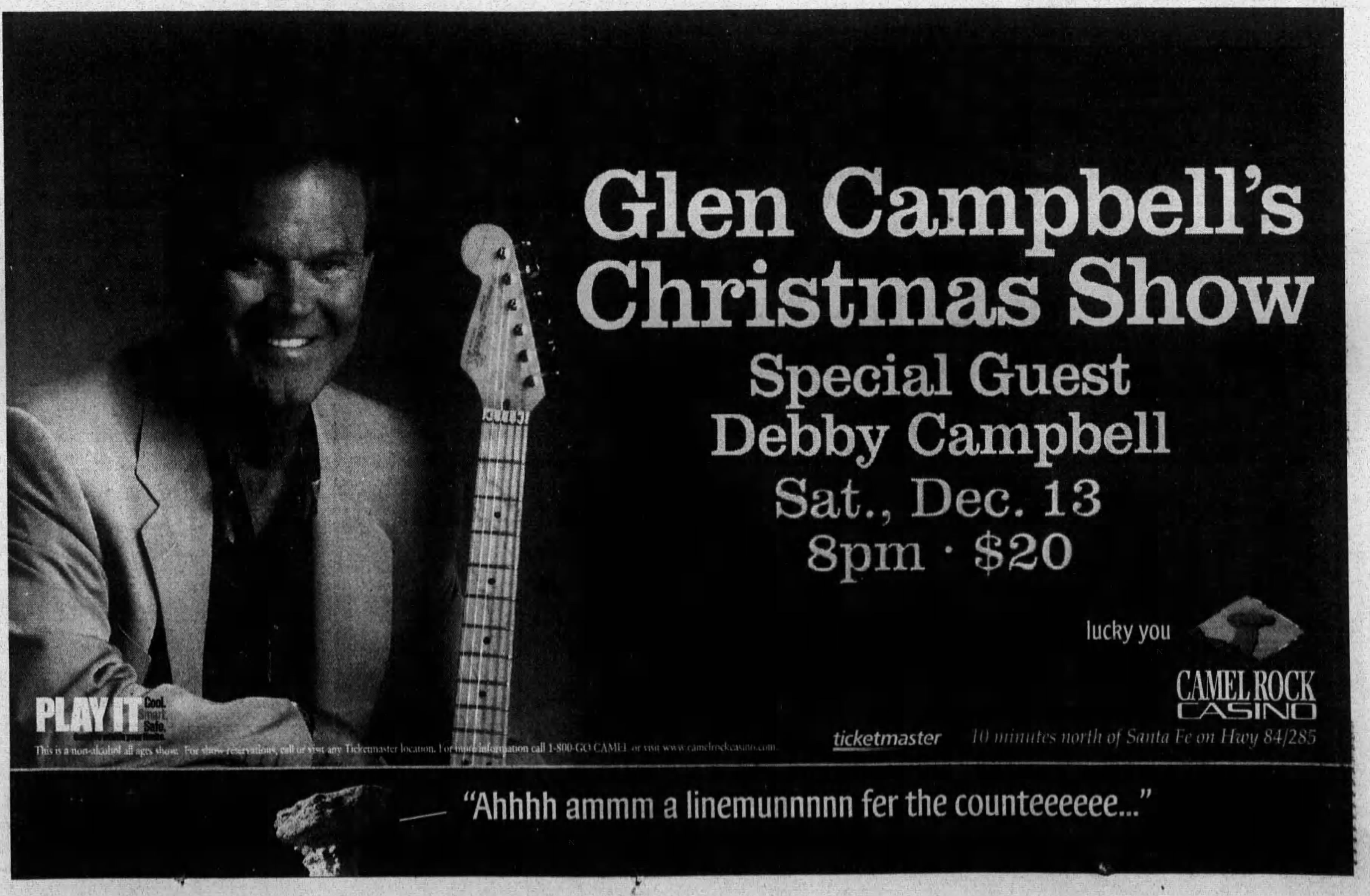 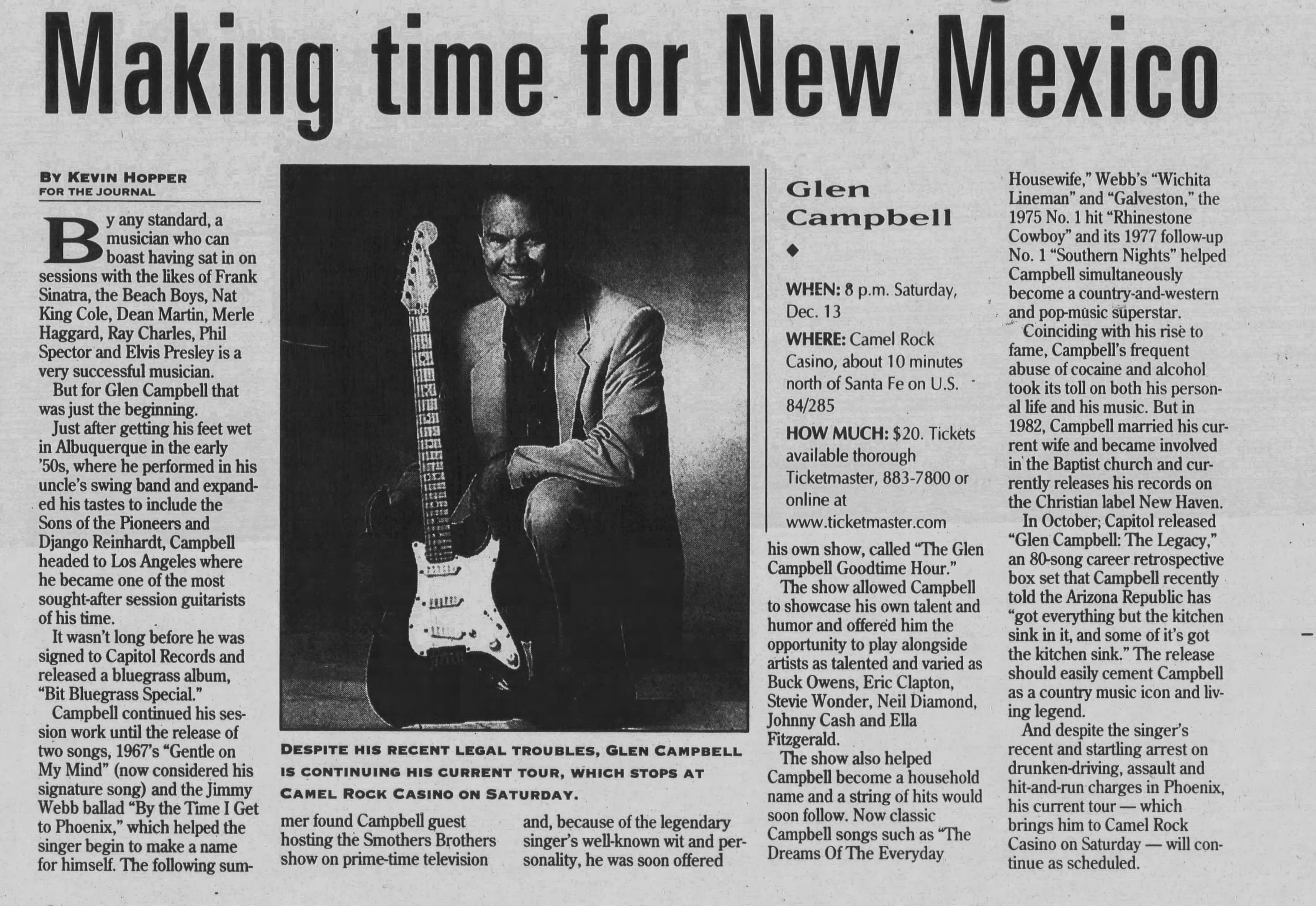 by jay
Randy,
I have used that site a couple of times. I have also looked up concerts that I have attended and found them to be accurate.

It appears there is room for improvement...if you look at this guys journey...

It obviously is a site that is created and policed by its members. It appears easy to modify or correct inaccuracies.

Q: Is it ok to post to the forum or to send an e-mail to your contact addresses if a setlist is missing or if there's an error on the setlist?

A: Please don't do that, you can add or edit the setlist yourself. Check Editing setlists on this page for more information.

by Randy
Pretty interesting site but I wonder about the accuracy. Maybe Jay has run across this and knows?

by jay
To play at the Caravan East! August was future star packed! 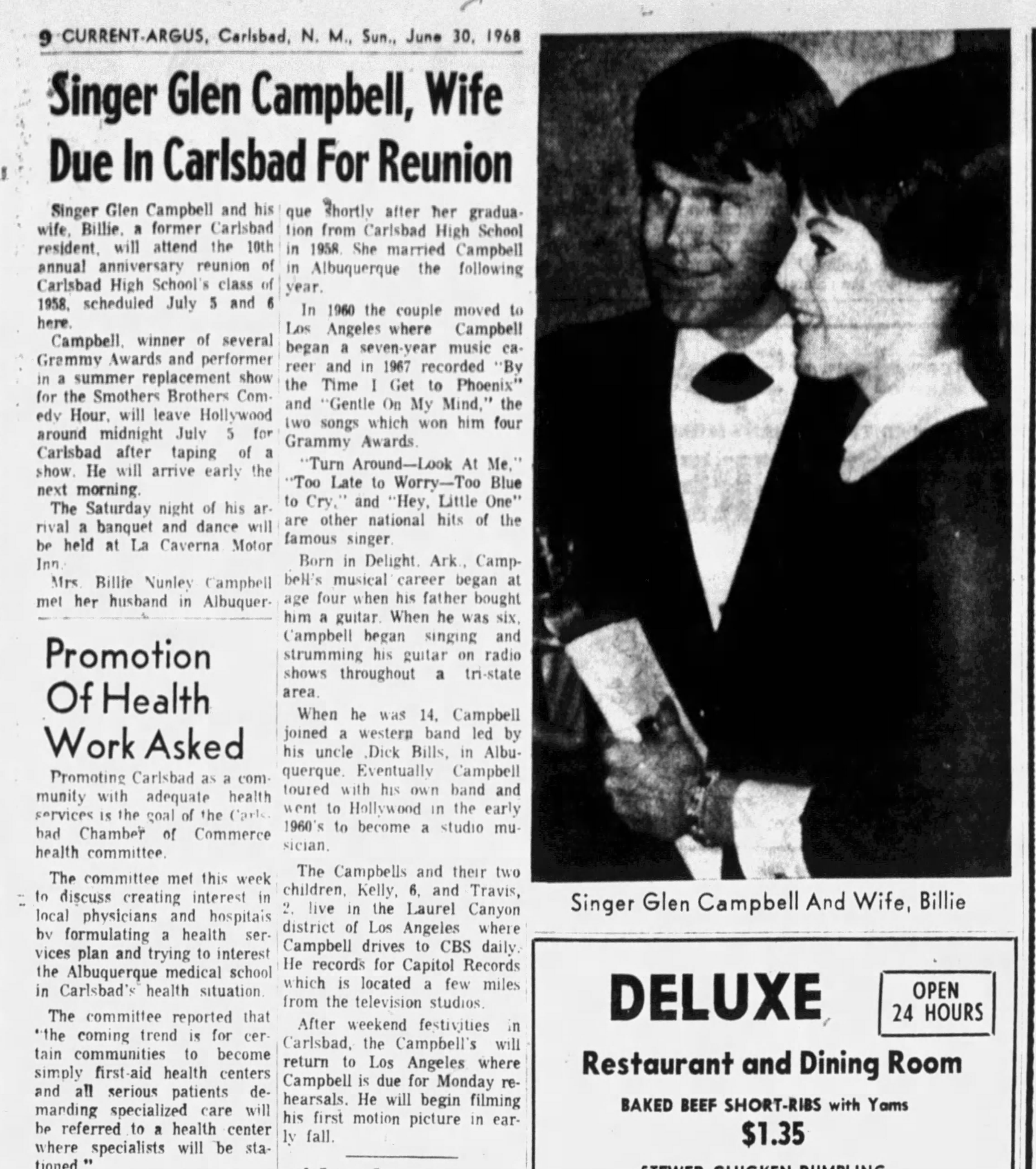 Re: Glen Campbell Returns to Albuquerque in 1965

jay wrote: ↑
Tue May 05, 2020 8:10 am
Roy Clark was in town for a 5-day stint at the Caravan Club. Glen came to town to promote his new movie to his home town. Three years later he would outsell the Beatles in records.


I recently discovered that Glen is playing rhythm guitar on a live album by Roy Clark, called "Roy Clark Live!", released in 1967 on Tower Records (ST/T 5055).

The album was recorded in from March 15 to March 20, 1965 in The Caravan-East Club in Albuquerque.

Glen was in Albuquerque at that time to promote the movie "Baby The Rain Must Fall" in which he plays a (tiny) role. First he performed on stage of the KiMo theatre in Albuquerque (with support from Roy Clark) then the movie was shown. Later in the evening Glen returned the favor by playing on Roy's live recording sessions. Glen played on the first three nights. After that he left to do some concerts (as a supporting act) with The Righteous Brothers(!).

Glen can be heard at the very start of the record, introducing Roy.

What I found interesting is that some the jokes Roy tells (and he tells a lot of jokes) found their way in Glen's own live routine. For instance, Roy is telling the joke about "warm hands on a cold morning (feels good when you're a cow)" and the joke about the cocktail made of milk of magnesia and wodka, called a Phillips Screwdriver (both jokes can be heard on the 1969 Glen Campbell Live album). Only Roy continues the joke with another cocktail made of prune juice and wodka. Can you guess what the name of that cocktail is... 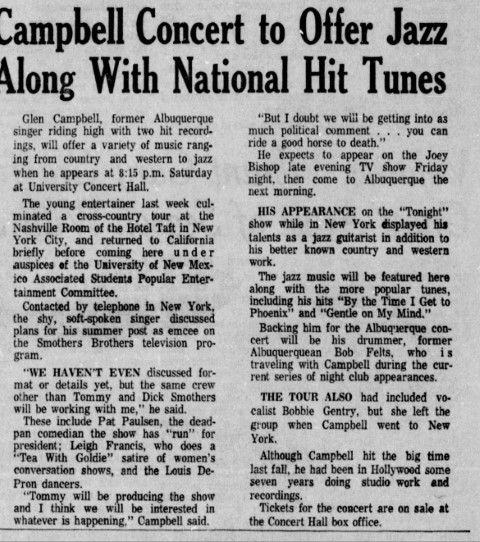 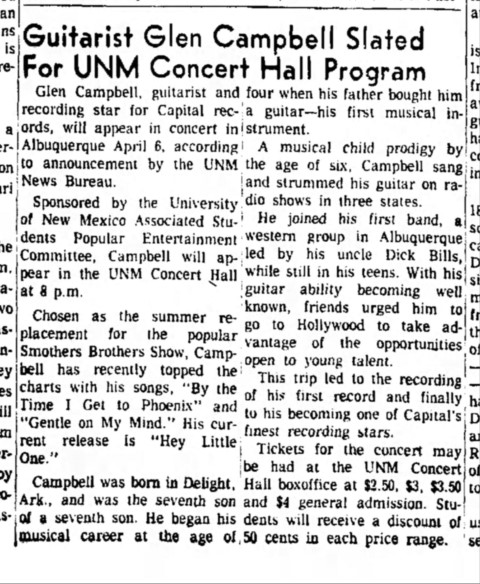 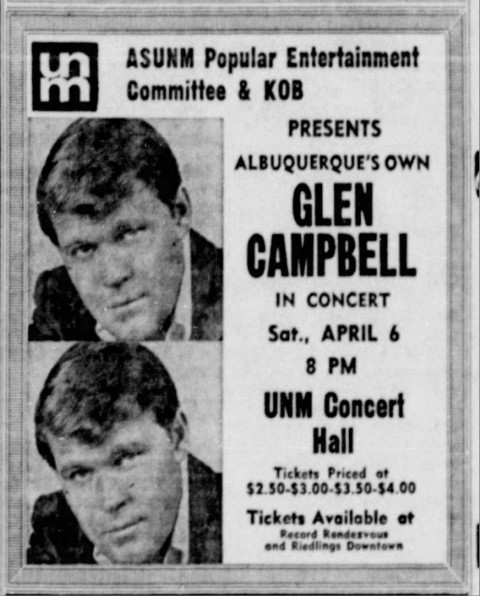 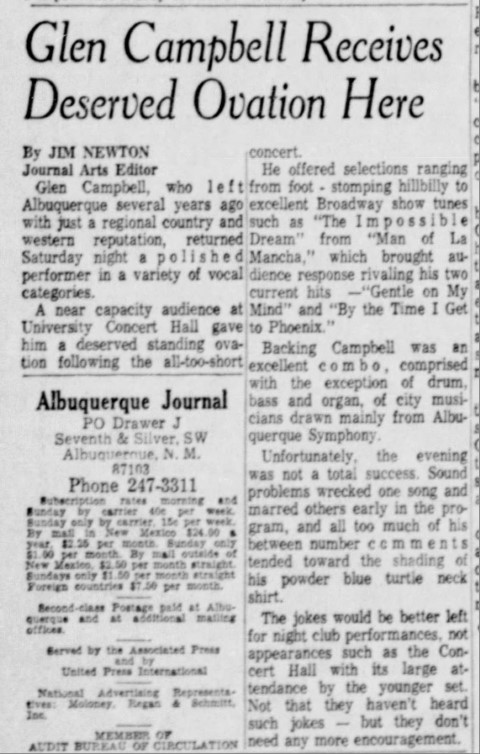 Glen Campbell Returns to Albuquerque in 1965

by jay
Roy Clark was in town for a 5-day stint at the Caravan Club. Glen came to town to promote his new movie to his home town. Three years later he would outsell the Beatles in records. 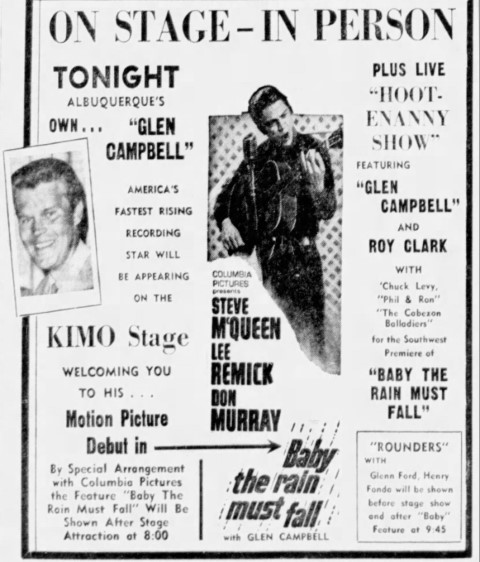 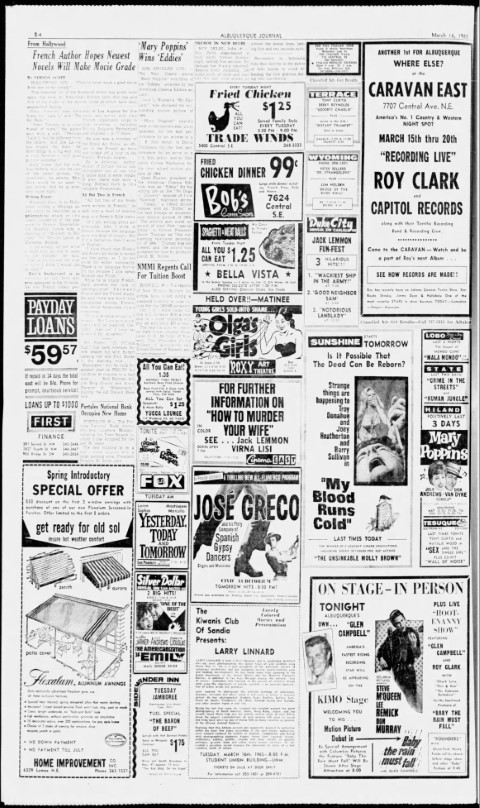 by jay
Glen performed at the NM State Fair Rodeo on September 13th, 1984. 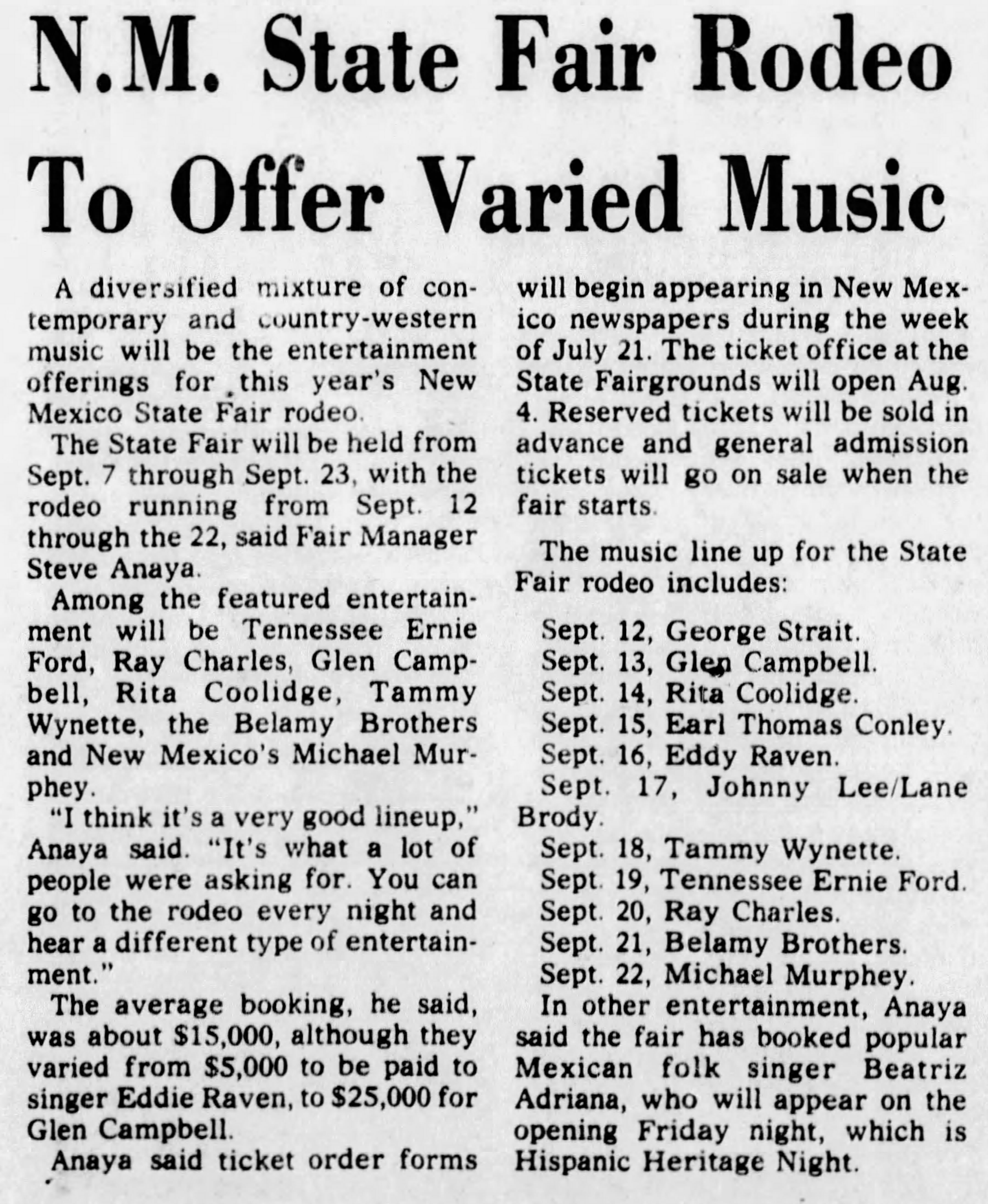 by jay
Glen returned to Albuquerque to play at the Tingley Rodeo Coliseum at the New Mexico State Fair during September 20-22 1968. One mention of interest was that Glen sang songs for commercials for $15 while living in Albuquerque. 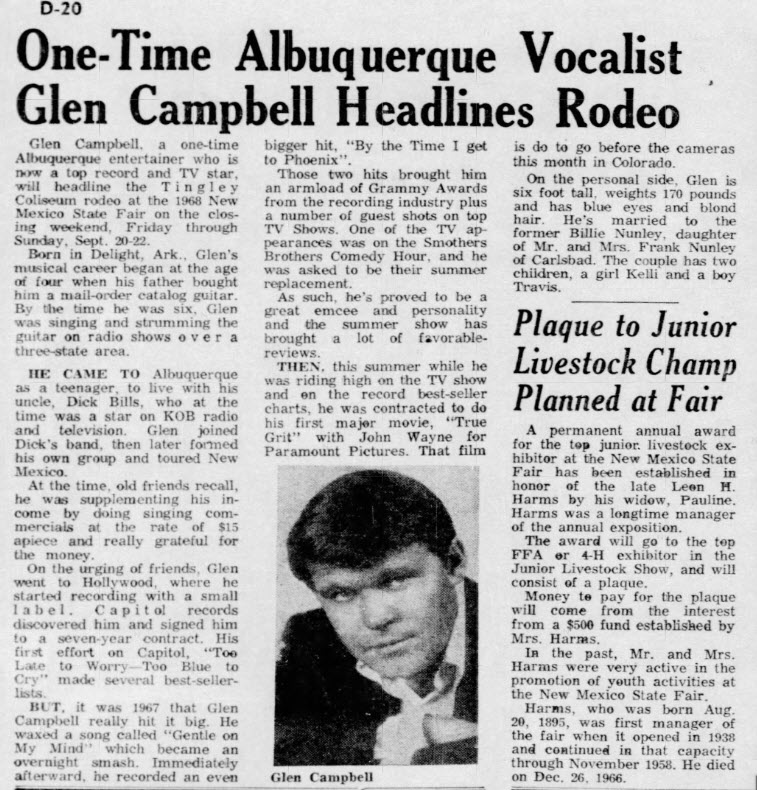 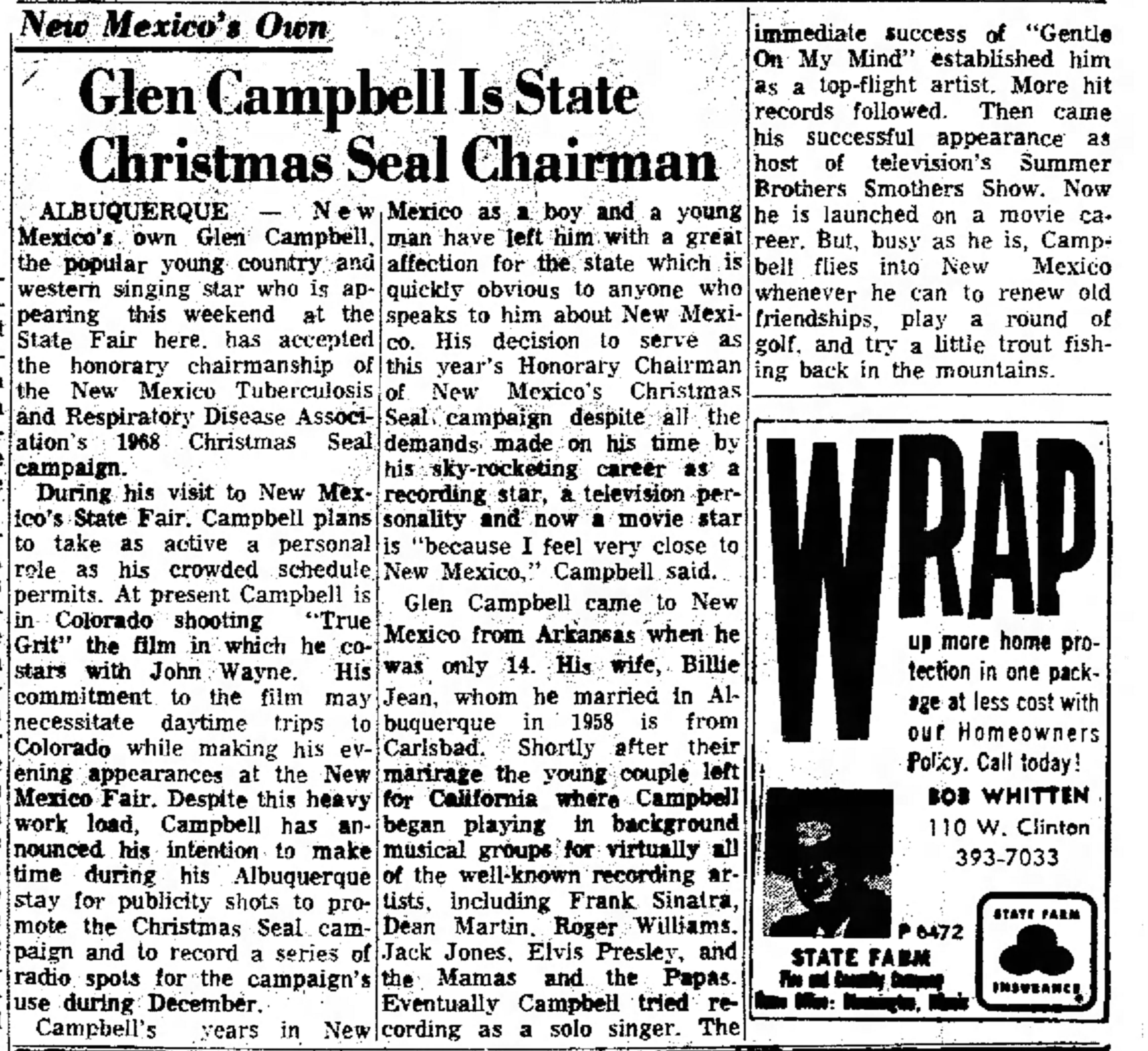