Hi Ar, I received the same email message from amazon and the CD shows as "temporarily out of stock" on their site as well as Bear Family Records, Target, cdbaby, and a couple of other sites. I had ordered a copy in early March, so I don't believe it is a stocking issue. Greyscale is a well-known, reliable label. Perhaps there is still a music rights issue with The Ballad of Jed Clampett?

Well, since we all have time on our hands while waiting for this CD of Glen's, I put together a YT playlist with songs of Glen's that relate to "time". Here is the playlist link if anyone is interested: "Glen Campbell ~ It's About Time" at
https://www.youtube.com/playlist?list=P ... G2SSulXqgv

Can't wait for this 12 string guitar either on CD! Got an email yesterday that there will be a delay from Amazon and they asked if I wanted to Cancel the order or wait! Of course I said wait...Anybody else receive this from Amazon? Basically it was this: "We're encountering a delay in shipping the item below"

Hopefully they sold many copies of this CD, and can't keep up with all us Glen Campbell fans!!

That’s great Dee2. The ballad of Jed Clampett is finally available on CD! Thanks for posting!

Good morning,,,,,I found this double CD set at Walmart yesterday!!! an exclusive set from this store and in the good ol' u.s.a.
Previously, it had only been sold in the U.K.,,,,,it is ADIOS the album with a BONUS CD of Mr. Campbell's Greatest Hits.
It seems to be the same Greatest Hits album released in 2009,,,,the tracks remixed,,,,and the audio may be the best ever on any CD.
Wishing all the great fans and my friends here a very Merry Christmas. ♥ BobbieG 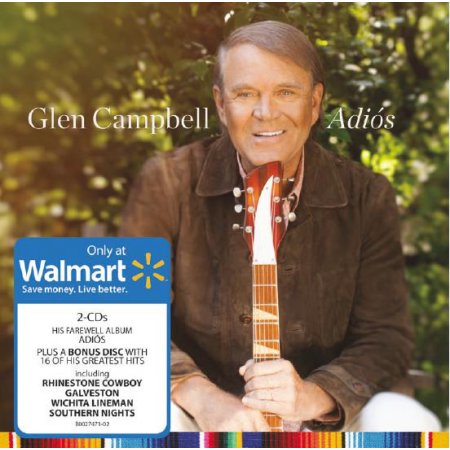 WHY are they not releasing DVD'S of the Goodtime Hour!
this is something they should have been doing a Long time ago! Were these under a certain production company, and the rights??
https://www.pinterest.com/alwaysandfo00 ... l-forever/" onclick="window.open(this.href);return false;

From Shout! Factory via YouTube comments today, they do not have the complete Glen Campbell Goodtime Hour series; just the select episodes now available on their site (ShoutFactoryTV.com).

Re: Any new CD or DVD releases? Goodtime Hours?

Your question is timely. Let's see what unfolds...today, the Shout! Factory channel on youtube uploaded one of eight Glen Campbell Goodtime Hour episodes that had only been officially available to stream on their official website. It is the January 10, 1971 episode with Liberace, Neil Diamond Linda Ronstadt and Larry Storch. (https://youtu.be/WBO265Vf7bc" onclick="window.open(this.href);return false;)

In the youtube description posted below the video window, S.F. posted:

The eight episodes are streaming at: http://www.shoutfactorytv.com/videos?ut ... dtime+hour" onclick="window.open(this.href);return false;.
Also, on this same S.F. webpage, the two Christmas episodes that were released on one DVD in October 2015 are now streaming (for free!). The DVD is still available for purchase on S.F.'s site.
Unfortunately, the streams can't be viewed outside of the U.S. and Canada, hugely disappointing for fans in other countries.

The Goodtime Hour Country Special released by S.F. in April 2016 is still available on DVD only.
https://www.shoutfactory.com/product/th ... ct_id=4572" onclick="window.open(this.href);return false;

Of course, since Kimbrell's press release, 'Adios' was released.

Around the time 'Adios' was released, Kim Campbell had hinted about the possible existence of a (home) recording with Elvis Presley and Glen Campbell.

No word of box sets, Goodtime Hour releases, etc.
Unfortunately, after Shout! Factory released on DVD / streamed a small number of Goodtime Hours, fans bootlegged the video material, posting entire shows and also all the segments on YouTube (and who knows where else). In light of these copyright violations, I had asked Shout! Factory if they had any plans to again release other Goodtime Hour episodes. Their response to me was: "NOT ANYTIME SOON!"
Why should they, really, when "fans" hurt sales of DVDs, violate music royalties, etc.?

The short answer is: no.

When TKO (T.K. Kimbrell) took over management there was one article in which he said there was a lot of unreleased stuff in the vaults, but after that so far we only got some vinyl rereleases of a few 60s albums.