This new retrospective will cover "the greatest stories" in the 59-year history of the Grammy Awards.
Great news for Glen Campbell fans: One of the stories is reported to be Blake Shelton's recall of his appearance with Glen Campbell on The 54th Grammy Awards in 2012.
He performed on stage when Glen delivered one of the most iconic performances in the history of the Grammys --and perhaps in all of Glen's career! (in our "unbiased" opinion!)
Fans will remember that Glen was also honored by the Grammys with a 2012 Lifetime Achievement Award.

About his collaboration with Glen, Blake recalls: “My first moment on that stage was with one of the greatest legends—not in country music—of the entertainment industry, period!”

For more info about this special to be hosted by Carrie Underwood and John Legend, check out these sites:

Relive the moment here (perhaps a member can find a better quality clip to post):

Glen's Grammy on display at the Country Music Hall of Fame and Museum in 2014: 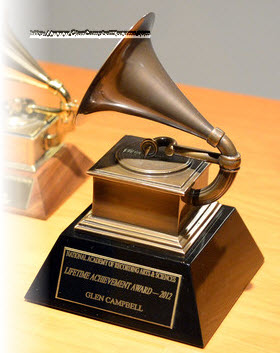