A look at the history behind many of the guitars Glen has used throughout his career.
Post Reply
8 posts • Page 1 of 1

I previously had contacted Steve Silvas, who was the photographer for the picture on the Adios Album. (as well as other photography sessions with Glen). He stated that the picture actually was taken during a photoshoot for Meet Glen Campbell. The post is located HERE

Steve shared with us:

"Yes, I did this shoot while working as a designer for EMI Music Marketing. This shoot was for the "Meet Glen Campbell" album if I remember correctly. I'm not a pro photographer by trade, but I shot many photos for EMI/Capitol in those days, so I was assigned to the gig by our creative director, Tom Recchion.

We shot over an afternoon at a small private recording studio in Los Angeles that was built into a converted portion of a home, so the image was shot in the backyard. We did several different setups inside and a couple outside as well. I remember shooting in front of a wall of guitars, inside a recording booth of sorts and then a few setups outside on grass and near a small wooded area. Glen and his wife were so nice and patient as we went through all of the shots and setups. I remember him being quiet but friendly and with a smile on his face a lot of the time. We did several shots with a guitar and he would go in and out of a song or two as we shot."

Thanks jay, I looked at your previous post on this guitar. Thanks for confirming. I had forgotten that previous video with Glen using that Gibson. Just as well you keep track of all this info. Thank you.

Looks like the Gibson. After the 60's, we didn't see Glen with an acoustic 12 much. If we did it was his '68 Ovation Like many other performers, including Gordon Lightfoot...the Gibson B25-12N seemed to be the acoustic he preferred, until Ovation made him his own model, which appeared to be custom.

Holy cow Mike. What a great video that is. Never saw it before. Thanks!

Good point jay, Glen didn't use it much beyond those early years. I was thinking that as he had that six string version he still considered it a good guitar to have around. I found this video the other day Glen singing "you can't take the country from the boy. In the video glen uses a 12 string giutar which I don't recall seeing before. Any ideas jay?
[youtubehttps://www.youtube.com/watch?v=Nd7AET07lkM][/youtube]

I can imagine Glen, really loved his.

I think Harrison and the others loved theirs more! I am not sure why, but Glen soon traded it in for the Mosrite 12 and then found what he really liked in the Ovation Bluebird.

Interesting you posted this item jay. I saw a programme just the other day about the development of guitars, and it made the very same point about George Harrison being given a prototype Rickenbacker when the Beatles came to America. I had not heard this before and now you have just confirmed that fact as well. They really revolutionised full bodied sound which you you get with these 12 strings. I can imagine Glen, really loved his.

The Rickenbacker 360/12 was among the first electric twelve-string guitars produced. The development began in 1963 and was offered in 1964. It has an unconventional standard head that placed the tuners in 90 degrees of each other. And instead of a full slot, it has the head 1/2 way routed through. The Beatles (Harrison had a prototype 360/12) and The Byrds (Roger McGuinn) were the first in 64 showcasing the Rickenbacker 12 with its eye-catching color and design. 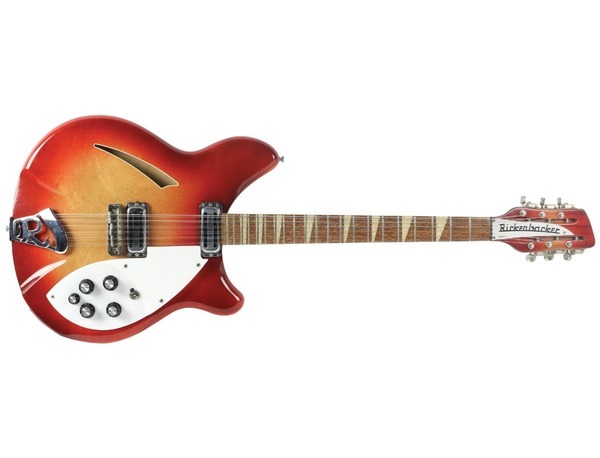 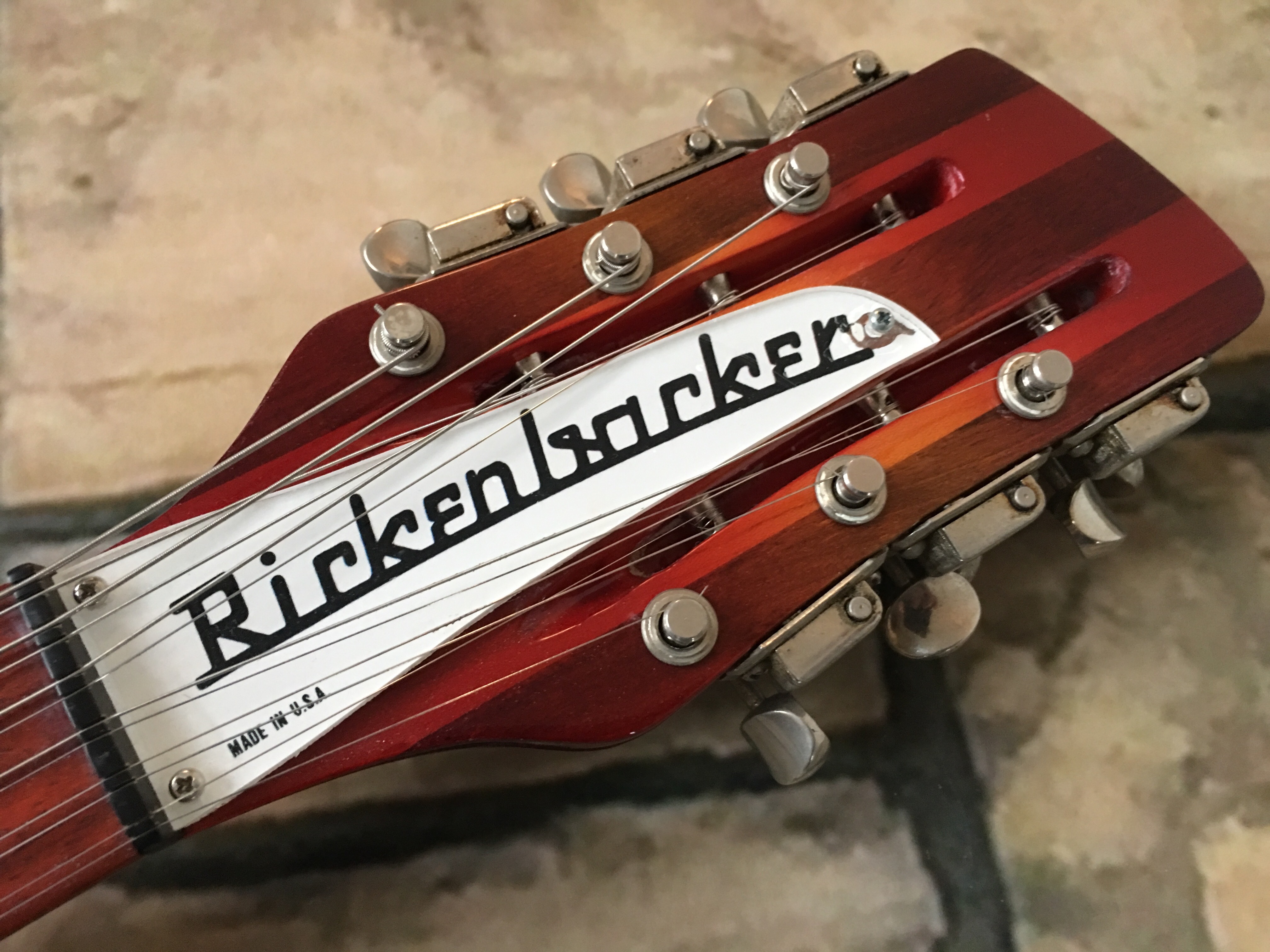 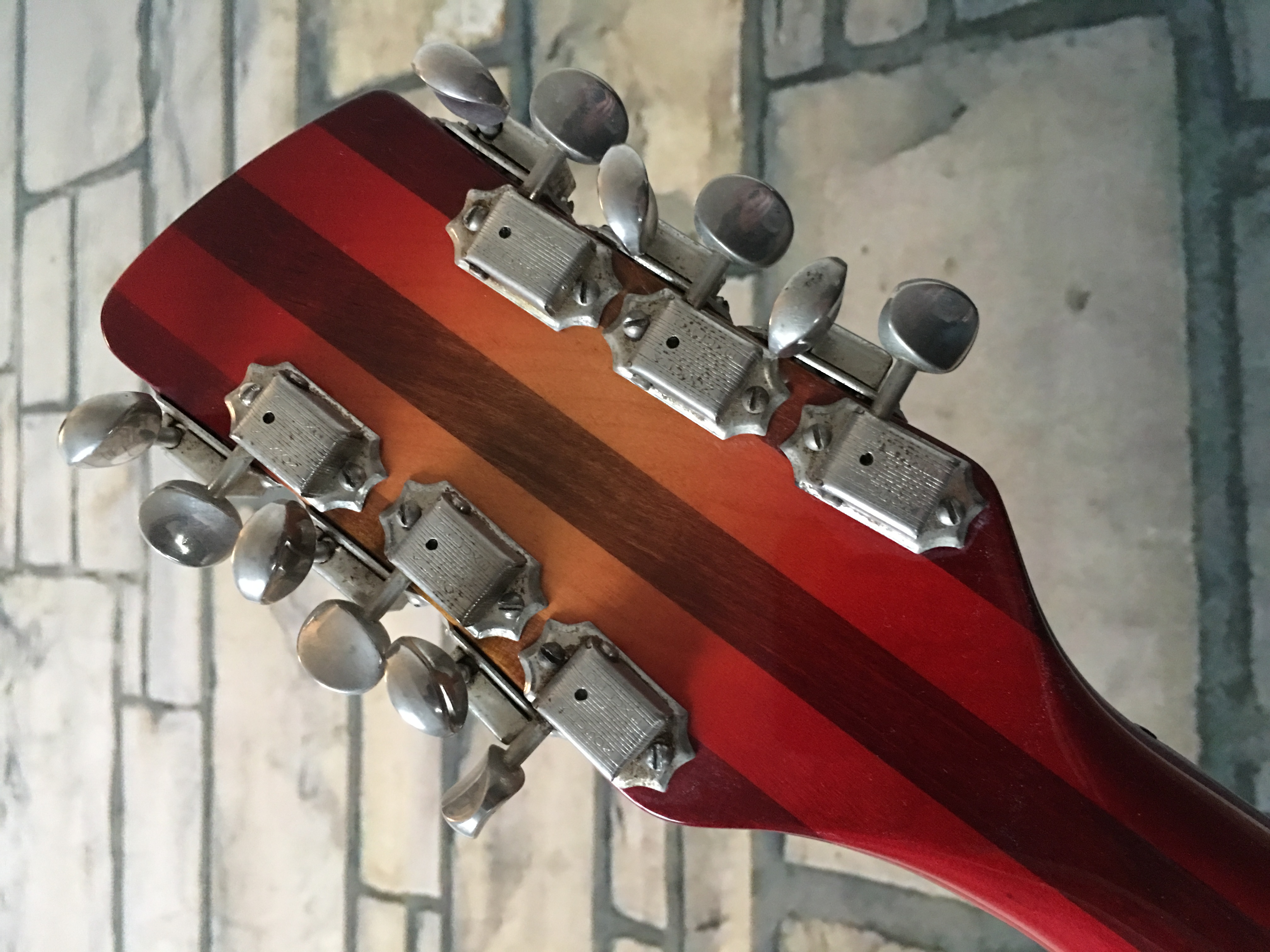 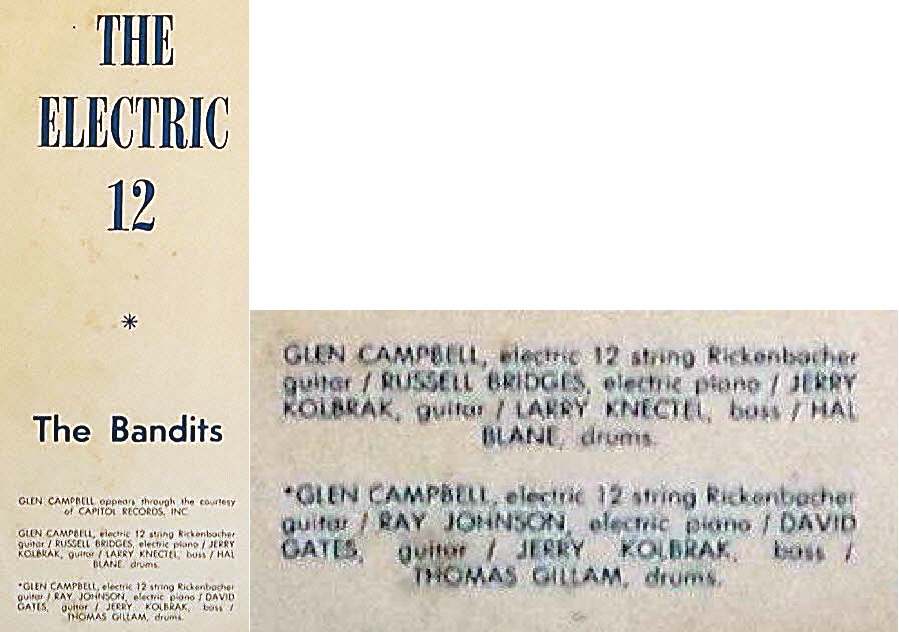 There is also a Youtube video of him using the Rickenbacker during that time...although it appears that he is "finger syncing' to the recording.

After that, there is little to suggest that he continued using it, as in 1965 he appears to have preferred the Mosrite Mark XII 12 String Guitar (Semie Mosely worked at Rickenbacker until 1958)

Glen's Adios album showcased Glen with a Rickenbacker on the front cover, although it was the 6 string version of the 360 model and was a photo taken during the Meet Glen Campbell photoshoot. 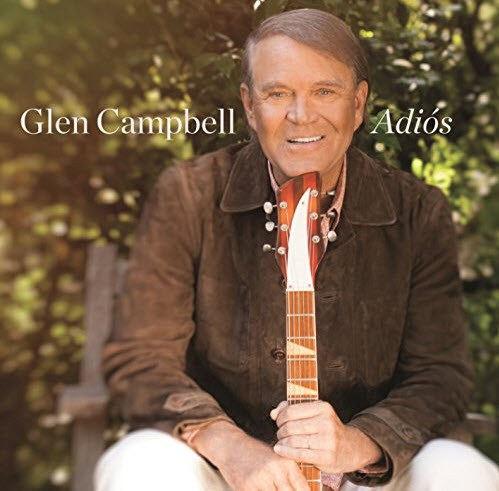